It may be small, but Whitby is perfectly formed — the jewel of Yorkshire’s coastal towns, with a history and heritage that sets it apart from neighbouring seaside resorts. The long sandy beach and thriving harbourside are invitation enough, but Whitby also boasts a huddled Georgian old town and a famous abbey on the cliffs above, not to mention a slew of good campsites in the local surroundings. Whitby is a perfect base for both the coast and the North York Moors, with lots of appealing places to pitch. As always, only the best make our Cool Camping shortlist. 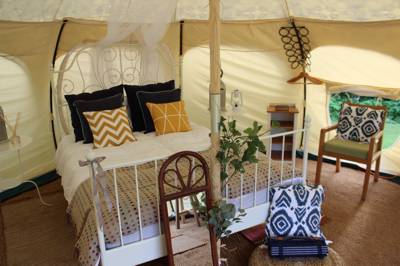 Camping and glamping in Whitby

Situated on the Yorkshire coast and surrounded by the North York Moors National Park, Whitby offers a great base for discovering the treasures of this vast region. And it’s no exaggeration to suggest that Whitby itself is chief among them. The town seems to tumble down the hillside from the 13th-century abbey above it. Fishing boats cluster in the harbour at the mouth of the River Esk and you can choose between the donkey rides and deckchairs of West Cliff beach and a sheltered cove to the south. There’s plenty to do and plenty of places to stay in this area including camping and glamping sites that have caught the attention of our camping experts. We look for smaller, independently run sites and we’ve found some gems in North Yorkshire. There are classic campsites where you can pitch your tent or park up in a camper and glamping sites with shepherd’s huts, yurts, bell tents, cabins and more. With sea views in one direction, moorland in the other, we reckon camping and glamping are the best ways to stay in Whitby and the surrounding areas.

Things to do in Whitby

If you’ve chosen a camping and glamping holiday in Whitby, you’re unlikely to run out of things to do on days out. There’s all the fun of a classic British seaside holiday on its West Cliff beach. You can hire deckchairs and take donkey rides, go swimming in the sea and build sandcastles on the shore. Ice creams, fish and chips, amusement arcades and crazy golf are all part of the fun. And how about beachcombing? The area is famed for Whitby jet. Popularised by the Victorians, it’s a black gemstone that’s made from fossilised wood. If you haven’t got the patience to find your own, you can always pick up a souvenir from one of the jewellery shops in town. Find out more about Whitby’s history in its museum and one of its most-famous former residents at the Cook Museum. It was here that a young James Cook was apprenticed and there’s even a replica of his ship, HM Bark Endeavour, in Whitby Harbour. Walk up through the town to the 13th-century Gothic Whitby Abbey for more history and to find out about Bram Stoker’s connection to it.

You can get out of town by hopping aboard one of the heritage trains on the North York Moors Railway which runs 24 miles through the North York Moors National Park to Pickering. The nearby coastal towns of Robin Hood Bay and Staithes, with their cobbled streets, and fishing heritage are well worth a visit too. Walkers are spoiled for choice with the Cleveland Way National Trail passing through the town, providing for well sign-posted coastal walks but if it’s countryside you prefer – just head for the moors where you’ll find an abundance of walking routes. From Robin Hood’s Bay you can follow the signposts from one end of Wainwright’s Coast-to-Coast route out in to the moorland of the national park. It’s also a great place for trail runners, cyclists and horseriders.