Book with confidence at Ettie's Field with our Coronavirus Booking Guarantee 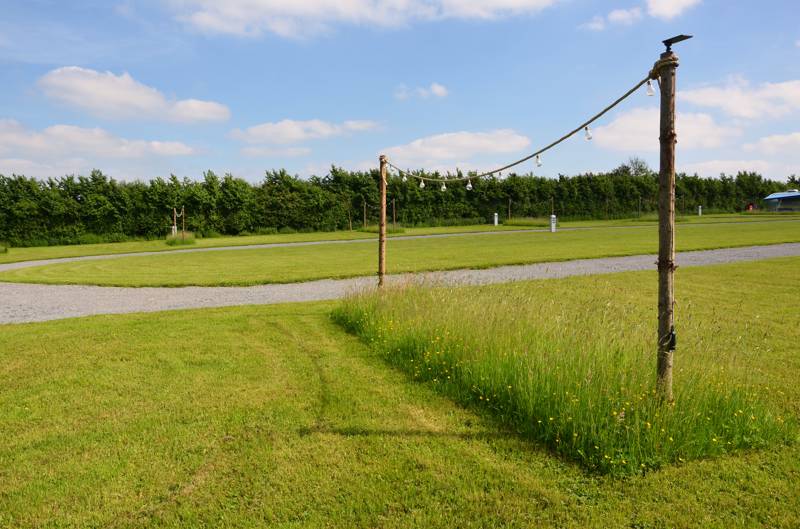 Circle pitch with electric and a water tap.

The premium circle pitches are situated at the top of Ettie's Field, very close to the facilities, toilets, showers, dish washing & Elsan point. We have family toilets and shower rooms as well female, male and unisex toilet/shower room. Visit our Boho-tique  open to our guests daily from 10am-12pm & 2pm-5pm. Also open to the public on Friday, Saturday & Sunday. Read More

Book with complete confidence at Ettie's Field with the Cool Camping Coronavirus Booking Guarantee. We guarantee the following clear policy for your booking:

Ettie's Field love children to visit but we have not designed Ettie's with children in mind so if you are looking for a playground, being able to kick a ball, throw frisbees, set up cricket or tennis or fly a kite on your pitch then Ettie's Field is not suitable.

Though it feels quiet and remote, Ettie's Field's proximity to the A444 and A5 means you have immediate access to a whole host of the Midlands' top attractions. It takes less than 10 minutes to drive to Twycross Zoo (0844 474 1777), Market Bosworth (good farmers' market on the fourth Sunday of every month) and the Bosworth Battlefield Heritage Centre (01455 290429). The latter commemorates the Battle of Bosworth in 1485, the last battle of the War of the Roses, in which Richard III was killed and Henry Tudor became king to start the Tudor dynasty. Interactive displays and a modern make-over give the place real family appeal. For watersports fans, rent sailing boats and canoes at Bosworth Water Park (01455 291876; 10 minutes' drive) or stay on dry land and go llama trekking at Lucky Tails Alpaca Farm (01827 820810) 15 minutes away. It's also a 20-minute drive to Drayton Manor Theme Park (01827 287979).

It takes all of about 15 minutes to walk down the lane to the somewhat dated Gate Inn (01827 715701)  Legend has it that famous, 18th-century highwayman Dick Turpin used to hide in the cellar  with his horse at Turpins Bar and Grill (01827 880111), a short drive away in Twycross that has taken his name. If you're looking for something special, San Giovanni (01827 881000) in Sheepy Magna is a plush and modern restaurant with designer touches and an excellent, raised terrace open in summer overlooking Sheepy Lake.

Search All Availability at Ettie's Field

Something a bit different!

This place really is special, there’s nowhere quite like it. The owners have created a “glamping not camping” site and they have some really beautiful Airstreams to rent, there’s even a gypsy caravan. The attention to detail really cannot be faulted. Each pitch is separated by a string of solar lights and long grasses, the individual bathrooms are second to none and the view is just perfect! After previously visiting in our VW van conversion we tried out renting a “Glawning” - which is a glamorous awning, and glamorous it certainly was! Beautifully decorated in boho Moroccan style with a comfy bed, armchairs and a lovely stove which warmed us up on a chilly October evening. The “club house” is also cosy and decorated to the same gorgeous boho style and it’s warm and welcoming for socialising etc. If you enjoy a bit of luxury then this is the place for you. We shall be returning!
★☆☆☆☆

It is a shame to write this review as this is a lovely little campsite with a nice decor and excellent toilets. I also think that after looking at other reviews the owners are probably very nice if everyone is saying nice things about their campsite but I get the impression that if their is a problem then they become very aggressive and rude. However we camped there for 5 nights and over the first few night a lot of Huskies (dogs) started turning up and then they build a massive enclosure for the dogs next to our tent. We got chatting and they said it was a huskie convention but the owner had said she had told everyone. Unfortunately she did not tell us! As you can imagine we were a bit stunned we were now camped in the middle of a lot of huskies plus the other dogs they had bought with them. I went to see the owner who to be honest was rude and dismissive and said it was a dog friendly site and could not see why we had any problem at all. I asked if we could move pitch as we were right in the middle of it and it would be good to move. She said this was impossible and did not see any problem. Although there were lots of empty pitches that remained empty for the remainder of our stay. She said we could leave if we wanted although by this point it would be tricky with my 8 year old son and all our camping gear set up. She did not at any point either say sorry, try and help or even try to understand why this might not be acceptable to be camping in the middle of a huskie convention. She said she had told people staying over the weekend but not us. the other gust there were also upset by all the dogs and even the kids joked about it. On top of this they have a lovely club house, so we decided to spend some time in there to get away from all the dogs and growling. We were then told we had to leave it as they had booked it out for a meeting, so there was no escape! My favourite part was going to the toilet with dogs either side of the path growling and barking at you! The owner of this campsite really ruined our holiday as her attitude was unacceptable and upsetting, although I have to say all the huskie owners were lovely.
★★★★★

A bright, friendly and out of the way place.

We stayed in one of their airstream 'Bumble' in which we only had to bring ourselves and food. It was very well put together and fun to see how everything was tied into the bumblebee theme. It was also nice to be able to shut the door and cosy up on the beds to read or watch the TV while the May Bank holiday weekend weather was windy and unfortunately miserable. The campsite, it's self is so nicely put together and has a very creative/bohemian feel. The shower/toilet pods are ascetically pleasing inside and out (just a bit envious of them). Our boys enjoyed making friends with the donkeys and alpacas, though the peacocks decided to stay away. The dog walking area also doubles as grounds for ball games, which my eldest took full advantage of, along with some of the other families staying that same weekend. Next time we stay, we'd look into camping and staying for a more extended period so that we can fully appreciate just what Ettie's Field has to offer.