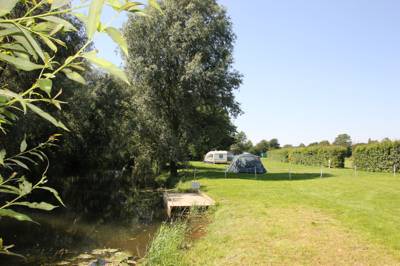 Riverside camping and bell tents in Constable's countryside, right in the heart of Suffolk's Dedham Vale

Flatford Mill, famously pictured in John Constable’s The Hay Wain, may be 15 miles away but you could well expect it to be a mere 15 yards away if you come to Rushbanks Farm Campsite. The place has all the hallmarks of a Constable oil painting. The River Stour edges the grassland of the camping meadow, almost stationary it’s so slow; fat lily pads pepper along its edges and tall native trees tower along the opposite bank. There are no horses or carts, of course, and the odd campervan slightly modernises the scene. But the beauty of this campsite is that really it’s left entirely untouched – a timeless slice of countryside where you can camp with minimal fuss (particularly if you opt for one of the riverside bell tents).

Opened in the 1950’s and now run by the third generation of the Bates family, Rushbanks is the only campsite directly on the banks of the River Stour. Along with its painting-worthy aesthetics it also has some features that make it an easy choice for a Cool Camping recommendation. There’s a thoroughly laid-back atmosphere, campfires are permitted (firepits provided for the bell tents) and the local pub is not only within walking distance but also within paddling distance, with canoes available to rent for gliding the scenic two mile route.

For urban amenities it’s a 20-minute drive into Colchester town centre, but naturally it’s the rural charm of Dedham Vale that’s most appealing. The 15th century buildings in nearby Nayland, the thatched roofs in medieval Lavenham or visits to Kentwell Hall, where actors recreate Tudor scenes, all play on the timeless appearance of the surrounding countryside. It’s difficult to find a more charming riverside campsite in the UK.

Toilets, hot showers, a children's swing and play area, outdoor sink for washing dishes, fresh water taps, chemical disposal point, recycling. Free boat launch into the River Stour (if you bring your own) and canoes available to rent. Campfires permitted with fire pits for rent and logs for sale.

Rent a canoe and paddle to The Anchor Inn at Nayland keeping an eye out for swans, geese and deer on the banks along the way. Or take a stroll along the local footpaths – Wissington's Norman church (01206 262453) is a short and pleasant walk away. It's just over 2 miles to Arger Fen Spouse’s Vale Nature Reserve (01473 890089), a fascinating mosaic of ancient woodland alongside fen meadow and regenerating forest. It's particularly good in spring when a carpet of bluebells covers the floor. For the exact painting area of John Constable's The Hay Wain, head to East Bergholt where Flatford Mill (01206 297110; 15 miles) is now a popular tourist attraction.

It's been around for over half a century but the things that make Rushbanks such a special campsite have been here longer still. The river, the views, the cute thatched villages and the pub just down the road... no wonder camping here never gets old. 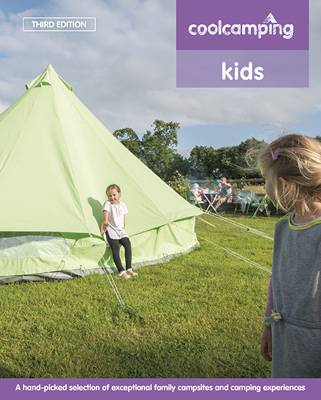 Rushbanks Campsite is set in the heart of Dedham Vale, an area of Outstanding Natural Beauty. The region was immortalised by the famous paintings of John Constable, and is thus known as ‘Constable Country.` Rushbanks Campsite is the only official site on the banks of the River Stour, close to the charming Suffolk village of Nayland which is characterised by picturesque 15th century buildings.

The site first opened in the 1960’s and has been in the Bates family for three generations. It is currently operated by Gareth & James Bates who will be pleased to see you down there on-site.

Over the years the site has grown in popularity, with people returning at different times of the year to enjoy the changing colours of spring, summer and autumn.

Rushbanks Farm welcomes families who want to enjoy themselves, whilst providing many opportunities for nature lovers and those who want to explore the great outdoors – or others who just want to relax, and wind down around a campfire under the stars at night. We hope to see you soon!
Read More

Book 14-nights camping and get £50 off your stay

Book an 8-night camping stay and only pay for 7.

8 nights for the price of 7

Book a 7-night camping stay and only pay for 6.

7 nights for the price of 6

60 undesignated grass pitches, plus a pair of bell tents. No electrical hook-ups. 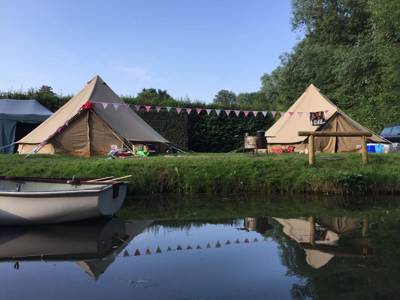 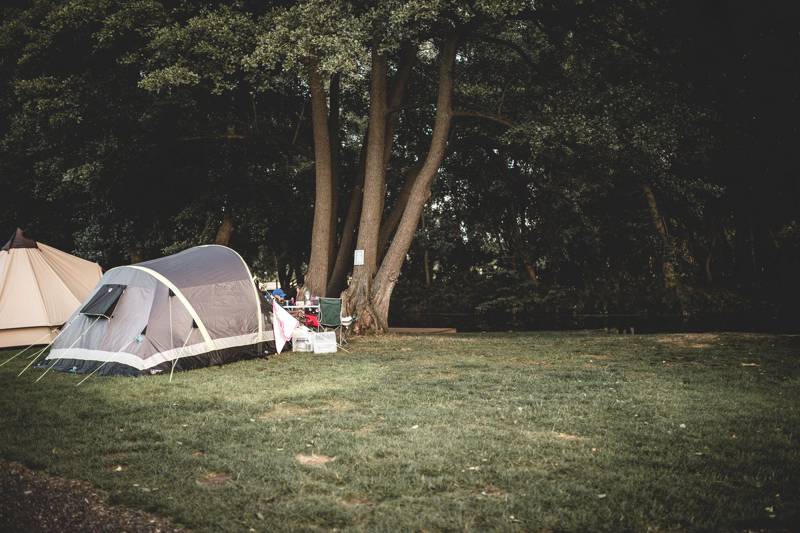 i
Pitches are suitable for large family groups – kids camp free in the same tent! One tent per pitch.

The nearest train station is in Colchester (Colchester North; 0845 748 4950). Taxis to the campsite from there are approximately £15.

We were at Rushbanks Farm Campsite over the bank holiday weekend and although I worried we wouldn't get a decent pitch arriving around 6pm on Friday, we lucked out with plenty of space backing onto the fields. I loved this campsite, with its river access for swimming and canoeing, canoe rentals, and detailed instructions from the helpful and friendly staff about how to get to Nayland by boat where we enjoyed good food and drink at the Anchor Inn. The staff are great at controlling the site and ensuring there is quiet and fires are out by 11pm. I know some campers complain of this, but I appreciate safety-consciousness around fire and water, and that the campsite owners take this seriously. My only suggestion for improvement would be: 1)Outdoor showers next to river for rinsing off after a dip. 2) improved/expanded shower facilities. 3) More basins for washing up Other than that all was perfect. Will come again!
★★★★☆

Very relaxing 2 nights camping with my son. Beautiful setting, right by the river, friendly campers alongside. No problem for me having to put the fire out at 11.00 good idea to allow families to settle down for the night and get some sleep. Would come again and recommend, especially if you have a young family.
★★★☆☆

A bad campsite in a great location

A bad campsite in a great location. Wonderful riverside location with kayaking and swimming from the banks and jetty. But hopelessly over-crowded at weekends and with in-your-face staff patrolling the site in their branded uniforms. More than happy to sell you logs and firepits, but all fires have to be out at 11pm. Firstly this is too early - especially for those families who want some time to unwind after finally getting the kids down. But worse than that the staff come round 20-30 minutes before that hassling you about putting the fire out at 11. We told them to go away. I think the owners believe this is a great campsite, but if it wasn't for the river there wouldn't be a single tent there.
★★★☆☆

Nice spot but too crowded

This is a pretty site by the river but in practice less than 20 percent of tents could have a pitch with a view of the river. There are 60 pitches advertised but it seemed like more than double that. The canoe trail to the pub involves difficult carrying of very heavy canoes around weirs- although the canoe was fun we weren't up to the carrying around the Weir , only for 2 strong adults, so couldn't complete the route. Due to the numbers of campers, we had to queue for toilets and washing up facilities. There are many signs about keeping noise down after 11pm, but on the Friday night there were many noisy groups after 11pm. This site may be fun if you have your own (not very heavy) water craft and visit during a quiet period.
★★★☆☆

Camped at Rushbanks Farm for a first time at a May bank holiday weekend. A really good location, great family friendly campsite, but I was bit disappointed with the facilities. In particular the portable showers, I tried 2 times but didn’t get any hot water. Also there are only 2 places for washing dishes so at peak times you ended up queuing. The only sinks were in toilets cubicles, not always pleasant to brush teeth. The campsite could do with some facilities upgrade!
★★★★★

We had two nights on the site and we really enjoyed it. We hired a canoe and paddled to the pub with our boys (3/6yrs) who loved it! We would come again! Thank you!
★★★★☆

Campsite has a fantastic location down on the river in a really beautiful setting. Lots of flexibility of where to pitch too. Toilets are clean but portable showers were the only downside (although were lovely and hot!). Really friendly and helpful staff and the canoe hire was brilliant and some lovely local walks. Would definitely go again.
★★★★★

Return visit was everything we expected.

Toilets - exceptional! This campsite is kept immaculate Friendly staff, willing to help. All needs catered for. Shower was really clean and powerful however cooler than hoped. Thanks to the staff and we will see you again next year.
Show more 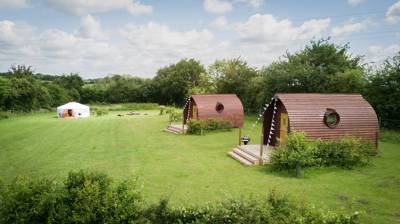 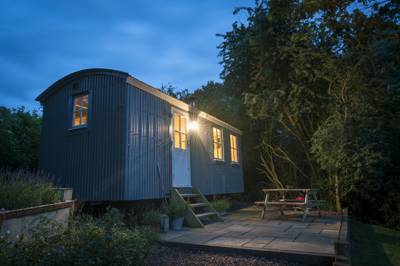