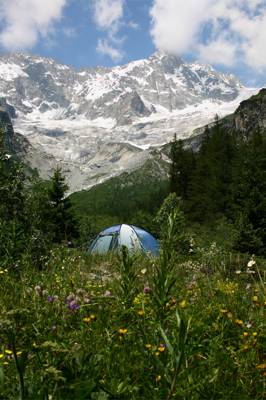 Mountains, meadows, glaciers,wild flowers – everything you associate withsummer in the Swiss Alps
The Swiss don’t do clichés – but if they did they’d probably be the best clichés in the world. Sure, there are a few images that pop immediately into your head when you think of Switzerland – Heidi in flaxen pigtails or yodellers in tight leather shorts (delete according to taste), triangular chocolate bars and cuckoo clocks. That sort of thing.

The site is spread out like a giant green picnic blanket on the side of the hill at the end of the glacier moraine, and you can take your pick from three types of pitch – in amongst the grassy rocks thrown down the mountain by the action of ice and gravity, with views up to the mountain tops; on the open meadow looking back down the valley; or in amongst the pine trees and wild flowers, where you can’t see the wood for the trees (and the bees).

The owners of the site, Agathe and Michel Darbellay, have run it for nearly 40 years and seem to have intimate knowledge of every blade of grass and flower in the place. Agathe will show you some of the seven different types of wild orchid that grow on the site and can even occasionally point you in the direction of a rarer mountain flower, such as Campagnola thyrsoïdes, growing wild somewhere about the place. It helps enormously that she speaks excellent English along with a number of other languages. She’s always bustling about the place, popping in for a quick drink with some guests who are back for at least the 30th year in a row, showing people around, pointing out the flowers. It’s a small wonder she doesn’t get dizzy.

In contrast, Michel is a quieter type (you couldn’t have two of them like Agathe – it wouldn’t work), though his reticence results from as much modesty as from the fact that he doesn’t speak English. He’s also as far removed from the dizzy type as you can imagine. He was, after all, the first man to scale the north face of the Eiger solo – a feat he achieved in 1963. Luckily this was before Agathe came along, because she claims that if they’d been married then, she’d never have let him anywhere near it.

The site’s a 10-minute stroll from the hamlet of La Fouly, a modest ski resort in the winter months, with a black run and a couple of reds and blues. But it’s probably even more popular in the summer, when the meadows are laced with a profusion of wild flowers and the melon-green river comes crashing down from the glacier.

There’s an intricate maze of walks and climbs from the village, or from Ferret a couple of miles up the valley, and although the mountains around La Fouly are not quite in the Eiger league they can still hold their heads up high. The twin peaks above the site and the col (mountain pass) that leads over to France are sufficient for most serious walkers and you’d need to do more than strap a pair of crampons to your Gucci loafers if you wanted to lunch in Chamonix. It’s only 10 miles (16 km) away as the crow flies, but it will take you an hour and a half by road over the Col des Montets.

Not that you need to go all that way when everything you need is here – all those boringly bog-standard Alpine things.

The newer 2 facilities blocks are great, the older 2 (beneath the reception area) are a little tired these days, but are perfectly serviceable. There’s also a handy day-hut with a TV.

Take a trip to the breathtaking Gorges du Durnand (www.gorgesdudurnand.ch), a collection of 14 waterfalls with wooden walkways connecting them. The walkways are built into the rocks and you might find some of them are pretty hair-raising, but it’s worth it for the spectacular views. In June and July there’s an open-air cinema at Martigny (www.open-air-kino. ch). Check with them what films are on and which are dubbed into French and which in English with subtitles. Otherwise you’ll end up watching Indiana Jones et le Royaume du Crâne Cristal and not knowing what’s what.

There’s a supermarché in the village, about 10 minutes’ walk from the campsite. Just above it is the Restaurant des Glaciers, which has recently been taken over by a new chef who’s introduced a bit of flair to the menus, which start at CHF22 for a set 3-course lunch.

From Martigny head for Champex-Lax and the Grand-Saint-Bernard Tunnel. Turn right at the town of Orsières (where there’s also a railway station) and follow the road up to La Fouly. Drive through the village and, opposite the chair lift, veer down to the right, cross the river and you’re there. Buses and trains run from Martigny to Orsières and there’s a bus from there to La Fouly. It takes about 20 minutes and runs about 7 times a day, from 06:45 to 18:05.

If you like nature and walking up mountains (climbing is possible too) camping des glaciers is an exquisite spot. The campsite is huge and there is always a spot which ensures privacy (or shade). Busiest time is in July and August, but even then don't expect an overcrowded campsite. You'll find lots of young parents with 4-8 year old kids who need to walk/climb/hike (a lot) and want their kids to follow them in their footsteps. You can start hiking right from your tent/caravan or motorhome (e.g. cabane a la neuve) which will test your skills. The campsite is visited by lots of people/groups who walk the "tour mont blanc trail", which can take you from, france to italy and switzerland walking around the mont blanc. Every visitor (even the oldest) looks active, healthy, fit and young. Weather can change quickly and surprise you (it can be very cold at night even in summer). Fresh bread every day from the campsite. Showers and facilities OK. There's a large open for all cabin where you can sit and read books if you want space your tent. La fouly is a cosy village. 8 meter campervans do not impress, small tents do. No glamour (maybe only the expensive arcteryx outfits). The campsite is quiet: no noise, no parties only the cracking noises form the glacier itself might frighten you sometimes (and small avalanches of stones heard). Starry nights endured when the sky is clear. We loved it!
Show more 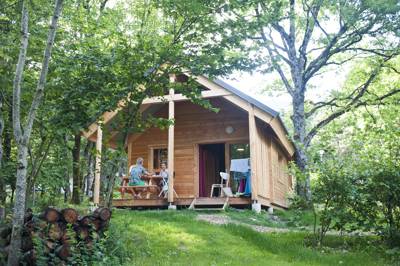 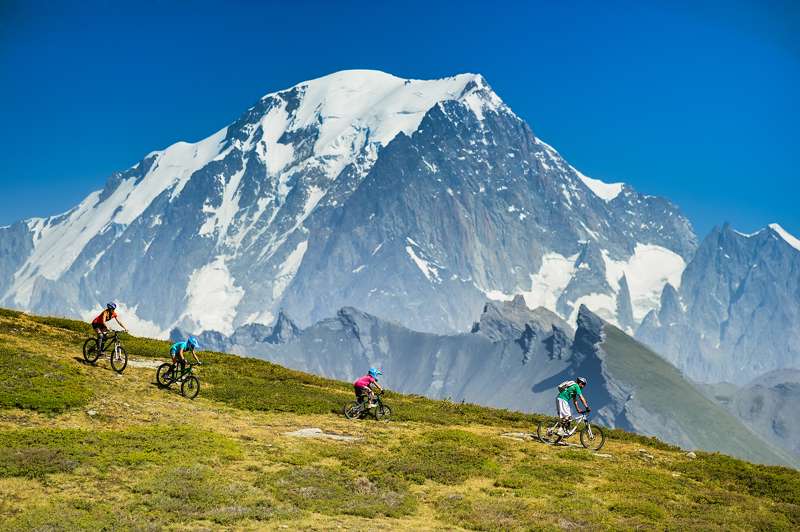 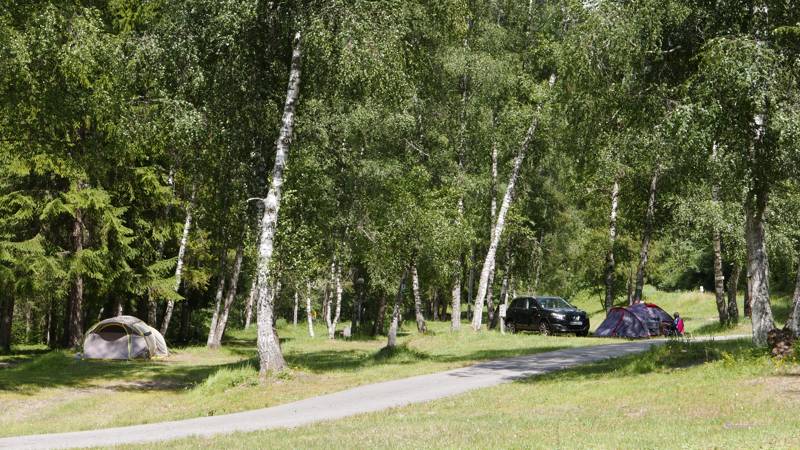 Savoie, Rhône-Alpes
Route du Chevelu, 73350 Bozel, Savoie, France
Summer camping in the heart of the French Alps, with views of Mont Jovet and hiking trails on the doorstep – plus ski-friendly chalets open in winter