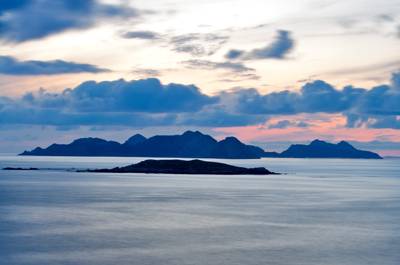 Island camping with nothing but mountains, sea and tents

Mmmm. Let’s see. A group of uninhabited islands off the western coast of Spain, turned into a National Park in 1980 and with limited access by ferry. No roads, so no cars, camper vans or caravans. But there is a campsite. Interested? You should be.

Las Islas Cíes – Isla del Norte, Isla del Faro and Isla del Sur o de San Martín – are just off the western Galician coast, across the bay from the city of Vigo, and are only accessible by a special ferry service. This has the effect of limiting the numbers of visitors each day. To prevent keen campers from pitching up for the whole summer, stays are limited to 15 days at a time and you need to get a tarjeta de acampado (camping ticket) at the camping office at the Estación Marítima de Ría in Vigo before you head over. Once you’ve arrived, there are handy barrows to help you wheel your gear across from the jetty, and once your tent’s up and your kit stowed, you’re free to explore your surroundings, like proper Famous Fivers.

Some areas – like the cliffs – are closed off to the public and accessible only by guillemot or gull. But you’re more likely, anyway, to emerge from the campsite’s trees and head for the curving Playa de Rodas, where the locals often come to sun themselves. They like to think of this as their little slice of the Caribbean and, on a fine day, who’s to argue with them?

Facilities are decent enough, with hot showers and washing facilities. Otherwise this not a campsite with thrills and spills, though there is a handy supermarket and café onsite.

There's plenty of lovely beaches on the island. Bring some binoculars and a Bill Oddie phrasebook and enjoy the abundance of birds. Snorkelling and kayaking can also be arranged from the site office. There’s a lovely parador on a rocky promontory at Baiona (0034 986 35 50 00), due south of the islands. If you can’t stay (doubles start at €198), then at least enjoy a meal of local Galician cuisine in its restaurant. There’s a special menú degustación at €33.

There is a small supermarket and café/restaurant on the site, but for the real experience bring your own food and cook it yourself (though sadly campfires are not allowed). You also need to take all your rubbish back to the mainland with you when you leave.

Mid-May–mid-Sept, plus the Easter holidays.

The ferry company, Mar de Ons (0034 986 22 52 72), sails from Estación Marítima de Ría in Vigo, but call in advance for sailing times. In low season there are only boats on Saturdays and Sundays. From June to mid-September the boats are daily. The fare is €17.50 return per person.