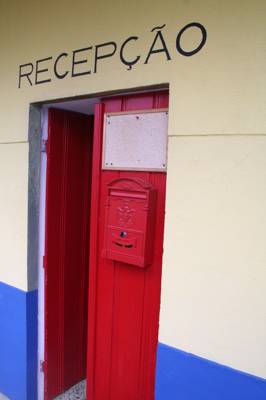 Where miracles and mosaics meet
In ancient Greece, the god of medicine, Asclepius, inspired the construction of many temples that were built in his honour next to ‘healing’ water springs. About 3,000 kilometres away, and some 3,000 years later, Asclepius is a little-known character amongst the villagers of present-day Soure in western Portugal. Nevertheless, any lack of knowledge of Greek mythology doesn’t detract from the locals’ appreciation of their own self-proclaimed healing waters. Their luscious landscape is literally bubbling over with springs and the temple, where you can experience their ‘curing’ powers for yourself, is called Termas da Azenha.

More than just a place to set up camp, this Atlantic-meets-Mediterranean complex (incorporating hotel rooms, a reception, an office, a huge spa treatment room and a bar) is a fascinating find that glimmers at the end of a long road, like a beautiful mirage at the end of a rainbow. The exteriors are all curvy, white-washed walls and spring-yellow columns, whilst the inside is decorated with a wall-to-wall underwater theme.

Mosaics are the big visual attraction of Termas da Azenha. More than 16,000 tiles have been used to create various mermaids, dolphins, urchins and other mystical creatures, creating a stunning walk-through aquarium. Designs are spread out across doorways, on ceilings and into every room on site, and any spot that isn’t covered in ceramic tesserae is occupied by a sculpture, picture or poem, instead. So there’s plenty to look at. This gallery is being added to constantly – and by guests, too, who can join in the weekly craft sessions.

Also inside, the oh-so-fabulous-looking spa is built around a water spring that the owners believe dates back to Roman times. The (apparently) magical elixir is said to cure eczema. A few soothing hours in the large hall with treatment rooms on each side will do a lot to de-stress your burnt-out soul, at the very least. Whether you opt for a sunken bath or choose to blast your pores wide open in a steam room, you’ll probably end most days in one of the marble-tabled massage rooms. As campsite perks go, the spa is a 5-star attraction.

Drag yourself outside – there’ll be plenty of time to spend in the spa later – and past the courtyard, past a single line of hotel rooms to the tiny patch of grass, otherwise known as the camping area. It’s not exactly the biggest campsite you’ve ever clapped eyes on. In fact, the space is maxed out with just four families, but it has a fresh feel. Breezes that blow from the Atlantic coast, an hour’s drive away, winding their way east to eventually roll over the rice fields right next to the camping spot, engender a pleasingly unpolluted atmosphere. Immersed in water, these expansive plains boost your camping comfort, too, causing the grass to spring to life like a luxury recoiling mattress.

To counter the sedentary nature of the onsite activities, you might want to try to burn off some energy elsewhere. Myriad nature walks can be tried out in the area and the Atlantic coast is great for surfing, whilst Figueira da Foz offers some of the best diving to be had in the country. After a heavy day’s activity, head to Lavos for a sunset drink before checking out one of the beach restaurants there, such as A Pérola do Oceano, a muchloved seafood haunt.

As you breathe in the view of the wetlands from your tent and soak up the calm, relaxed atmosphere, it’s hard to imagine doing anything more strenuous than dropping by the spa for yet another massage. You won’t always remember that you’re in Portugal; you’re in the Atlantis of camping sites, worshipping at the temple of good, clean, healthy fun. And what’s wrong with that?

A shower, a sink and WC. When these become too busy, you may use the 3 spa showers. The spa has steam rooms, sunken baths and 3 massage rooms (warm water, shiatsu and sports massages). There are two small pools, a library and a music area with a piano and a few string instruments. There is wi-fi (€4 per hour), a washing machine (€5), an outdoor solar kitchen and the owners will steer their beloved donkey, Esmé, for €5 a ride.

Surf at Praia do Cabadelo, south of the River Mondego, or stay put to make mosaics.

All year; but during winter you’ll probably feel warmer in one of the hotel rooms.

From Porto take the A-1 towards Porto/Coimbra. Leave the highway at Condeixa. Follow the N1 towards Lisbon and follow the signs to Soure. Go over 2 roundabouts, cross over the railway line, turn left at the T-junction and right at the next one. After 2½ miles (4 km) you’ll see signposts for Vinha da Rainha. Follow the road for just over a mile (2 km) until you get to a T-junction. Facing O Choupal café, turn right and follow this road until you arrive at Termas da Azenha. Catch a train from Porto or Lisbon to Soure, where the owners will pick you up for €10.