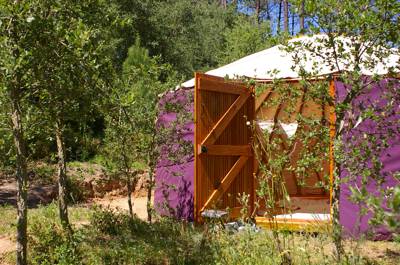 Back in the spring of 1998, armed with little more than a rusty VW campervan and a rough plan to open a beach bar, Hans & Irene drove down Portugal’s glorious west coast in search of a simple, less hectic life. Months passed before the Dutch duo locked eyes on a delightful campsite in the heart of Costa da Prata, a region known for its bounty of traditional villages, glacial lakes and pristine beaches. That campsite was Campismo O Tamanco, and whilst many of its competitors seem content tarmacking a few touring pitches and hoping for the best, Hans & Irene offer an altogether more distinctive, homelike camping experience. And we think you’ll love it…

Campismo O Tamanco buzzes in the way a campsite should. Like the region, Tamanco has retained much of its rustic charm, yet provides contemporary accommodation that’s in keeping with its natural surroundings. As well as tents, you’ll notice 8 innovative glamping 'tubes' made out of reclaimed materials, 2 stylishly furnished yurts, 2 wooden bungalows and a (very cool) converted Bedford truck, fully loaded with snug beds, wood-burning stove, gas cooker and BBQ – perfect for a spot of al fresco dining.

Beyond the campsite grounds, the Costa da Prata (also known as the Silver Coast) boasts many fishing villages, castles and monasteries, all waiting to be discovered. Chief amongst the region's most popular sites is the 12th century Abbey of Santa Maria (60km), where the tragic love story of King Pedro I and his beloved Inês de Castro unravelled, a harrowing tale that makes Romeo & Juliet look more like Wayne & Waynetta.

Adding to the region’s appeal is Portugal’s recent surf boom (now only second to football in terms of popularity) and in winter, when waves are at their most colossal, The Silver Coast attracts the surfing elite. The Guinness World Record for the biggest wave ever surfed (a 90 foot monster!) was recently recorded here. Of course, 90 footers are way beyond most of our capabilities, but from May to October the region’s waves become suitable for all us mere mortals.

It’s easy being a happy camper when you pitch up at Campismo O Tamanco. “Down to earth, yet up with style” is how Hans & Irene describe it; and frankly we couldn’t say it better ourselves. With its unequalled coastline, magical forests and exceptionally welcoming locals, it’s easy to see why the Costa da Prata was the couples preferred destination. So why not join them?

In addition to the 50+ camping pitches, Tamanco is home to 3 stylishly furnished Yurts (sleeping 2 or 4)  Each Yurt features lighting, wood floors, a queen bed or two single beds, 2 lounge chairs and an electrical outlet for charging devices. We provide linens and towels for use at the campgrounds bath house. The communal outdoor kitchen (for Yurt guests only) is equipped with stove, small fridge, kettle and crockery,  pots, pans, bowls and plates.

Two wooden Bungalows (sleeping 4)  are also available or try our amazing 'sleep in the round Tube' accommodation (sleeping 2), made from reclaimed materials and hidden amongst the vegetation. Tubes are fully furnished for travellers arriving with nothing but their toothbrush. There is even a communal outdoor kitchen (for Tubers only)  with everything one needs. Other onsite facilities include: toilet block, laundry service, outdoor ping pong table, fridges for rent, books, magazines and extensive documentation about the local environment. Tamanco’s spacious swimming pool (which contains salt, not chlorine) lies hidden in the midst of the rich vegetation.

Tents, caravans, motorhomes, surfers and digital nomads, kids and dogs (if they are friendly to the chickens!) and every-one with a great attitude who likes to live the outdoor life.

The wonderful Germanelo Castle (00351 239 561 132) sits perched 367 metres above a rugged hilltop. The castle was built in 1142 by Afonso Henriques (Portugal’s first King) during the Christian Reconquest, and became a key part of the Montego River defences. It’s thought to be the site of a Roman fort, and the wall that’s seen today was rebuilt to those original plans. The panoramic views over the Rabaçal Valley are magnificent and worth the trip alone. Lourical makes for a quintessentially Portuguese day out. Have a wander around the central square, before heading through the green wooden doors - you'll be amazed by the beautiful blue “Azulejos” that await you in the church. The nearby nunnery of the “silent order” sells religious amulets without verbal communication, as the nuns are not allowed to speak. Take an adventurous route along the chapel Nossa Senhora da Estrela and visit the fascinating rock formations and caves of Buracas do Casmilo. Figueira da Foz (33km) has been popular with Portuguese holidaymakers for years. The sands are so epic it takes a five-minute stroll across the boardwalk to simply reach the sea. Come winter, the place feels a little bleak, but when summer arrives things are much more cheery, with sun-tan-fans filling candy-striped beach huts, and surfers drawn by the world class waves. Back at Tamanco, on the hill behind the campground chicks, ducks and guinea pigs potter about merrily in the nearby children’s farm.

You don’t need to venture far for a decent feed; the onsite ‘Cantina’ offers delicious meals from Iberian and international cuisines. Choose from vegetarian, meat and fish dishes, featuring seasonal gastronomy at this cute, small scale Brasserie. All dishes are home made and lovingly “a la minute” prepared (whenever possible), with fresh produce from local farmers. Or, you can simply pop in for a drink and enjoy some heavenly homemade lemonade. The baker at Padaria Dionisio (00351 236 959 330) pays a very welcome visit to the site every day, offering a wide selection of fresh breads and croissants. The weekly market is a must for all foodies, try the delicious “flat” Chicken Piri-Piri, or fill up with a hearty breakfast at Pastelaria. There are a handful of decent restaurants in nearby Louriçal (6km) including: Restaurante O Ze (00351 236 962 172), Pizzaria Ratolas (00351 965 600 824) and Jacinto's Restaurante e Snack-Bar (00351 969 052 992.) The hiking town of Rabaçal (40 minute drive) is known for its delicious, yet very fattening cheese (up to 60% fat content!), which can be tasted in many of the local cafes.

Looking for a memorable getaway? It´s time to camp out!

Escape to our garden-like campground and enjoy the outdoors. Have easy access to spacious pitches for tents, caravans & motorhomes in the Orchard, the Cedar, “Baixa” or “Pinhal verde” area.

Camping pitches surrounded by organic vegetable gardens, forest feel & fruit orchards. Tamanco is not just like any campsite. We care about nature. We want, with you, to change the way we connect with nature in the little things of everyday life. Respecting it, taking care of it, saving resources, cultivating, making this idea a constant in our life! Although there’s plenty of rustic space to house tents, caravans and campers we are much more than just a regular campsite. There are also our cabanas, yurts, tubes and artist shack that make the difference, but above all: it’s us and our wonderful team. We make an effort in being this special hangout for people who love to create, to share and connect.

Roam free and feel the outdoors. At the end of the day your feet should be dirty, your hair messy and your eyes sparkling!

From the A1 highway: take the Pombal exit, followed by the IC8 (in the direction of Fig da Foz), then turn off at the last exit, Outeiro do Lourical. From A17: follow the highway before taking the Carriço exit. For both: At the roundabout (at the end of the exit) head right, and after a couple of meters you will see the campsite on your left hand side.

Pombal (15km) and Louriçal (5 km) train stations serve as the sites closest, with a pick-up service available. The nearest bus stop is 1km away.

We spend some time at this amazing campsite twice...just couldn't resist to come back. The campsite is very lush and has a cosy feel to it. And not to forget A Cantina where owner and chef Hans makes the greatest dishes. The first time we were there, was out of season, and there were campfires with great Port wines and grilled chourico. Second time, in high season there was a delicious Portugese grill party on Sunday nights. The pool is with salt water and the sea is nearby. Thanks Hans, Irene en Dries for a great time....we'll be back!