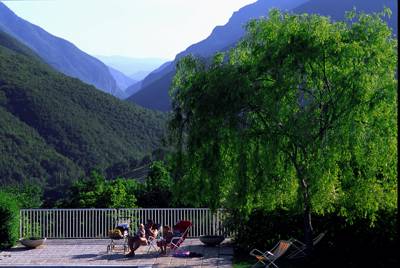 Il Collaccio is what estate agents would call ‘marvellously appointed’. Hidden deep in the valleys of the Umbrian hills, where the villages are so out of the way and ancient that you half expect a Roman legionnaire to come marching up the road and hail you in the name of Caesar, this agriturismo site lies across the hills from the pointy little village of Preci and keeps a wary eye up the valley for the distant approach of Caesar’s renegade legions.

Like a number of Italian agriturismo sites, this is a complex, which combines a small family-owned truffle farm with a modest hotel and restaurant, a stunning pool, some basic chalets and cabins, and plenty of terraces for campers, caravans and tents. To be honest, tents are in the minority. However, the site is so steep that once you’re settled into your little terraced bolthole, you can quite easily forget all about the two-wheelers behind you and just enjoy the peace and quiet.

The site’s right on the doorstep of the Parco Nazionale Monti Sibillini, which is slapbang in the middle of Umbria’s heavily wooded gorges and fairly serious Appenine mountains. At just under 2,500 metres, the highest of them, Monte Vettore, commands a bit of respect and certainly isn’t something you should undertake wearing a pair of trainers and a mac that folds up into its own little pocket.

You can get a sense of the scale of things by taking the road up from Visso beyond the tree line and onto a broad, shallow plateau of rocky meadow, at the end of which the town of Castelluccio pricks the skyline. Carry on over the ridge and there’s a 1,500-metre-high mountain pass on Vettore’s southern flank that can eventually bring you back in a loop to Preci, via the comely town of Norcia. It’s a great little taster menu of the à la carte delights that Umbria has to offer.

If it’s Italian heritage you’re after, then you can always call in at the medieval town of Spoleto, which claims yet another of Italy’s ‘finest’ cathedrals – though this time the boast holds water. Holy water at that. The campanile was built from Roman remains, the bulk of Spoleto’s duomo was built around ad1200 and the portico was added during the Renaissance.

Whereas so many Italian cathedrals have been tinkered with over the years – with their Romanesque façades tarted up with Gothic bling – this mishmash of styles is a surprisingly pleasant success. Inside it’s cool and white, with some wonderfully ornate little chapels at the back if you feel like a quiet word with ‘him upstairs’. Spoleto itself is a more ‘lived-in’ town than the rather pickled and preserved touristy spots like Orvieto. The shops are aimed less at passing travellers eager for a souvenir and more at the locals’ ironmongery and haberdashery requirements. So other than the narrow, twisty cobbled streets leading up to the duomo, it’s not the prettiest place, but at least it’s authentic 21st-century Italy. Elsewhere you’ll find the throwbacks to Italy’s darker and rockier past. This is the land of fortified towns built into the sides of hills, their defences telling you something about how precarious existence was for much of Italy’s history.

From the time of Caesar, right through to the Allied campaign up the spine of Italy in 1944, these places have seen some action. Thankfully, the locals are far from defensive and you’ll get a cheery wave from the Baldoni family at Il Collaccio when you arrive. And, if you’re lucky, they might even treat you to a truffle.

The facilities are a little outdoorsy, but fairly good and well tended. There is disabled access. The showers are fine and hot and there are washing machines at €4 a pop. 2 swimming pools are available for campers to use. If you feel you need a little education whilst on your hols, try one of the courses run at Il Collaccio. If you time your stay right, you can put your hand to anything from cookery to extreme sports and photography with award-winning photographer David Noton.

There’s an OK restaurant, Al Porcello Felice (The Happy Pig), onsite (which serves good river-caught trout as well as pasta and wood-oven pizza) and a small shop with very basic provisions, but the village of Preci’s not much good for eateries. So, if you want to eat out, head up the road to Visso for a wider range of cafés and bars.

From the SS3 road running south of Perugia, take the SS685 just before Spoleto and then veer back north on the SS209 heading for Visso. Just before Pontechiusita, turn right towards Preci. Just before the village, turn left up the hill and follow the signs for a mile or so (2 km) over undulating roads.