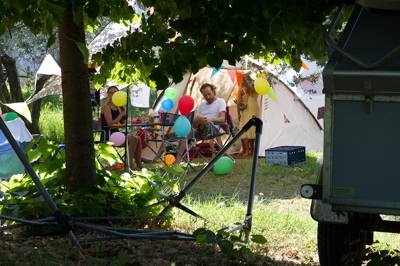 Pitches in poppies and olives, with views of the lake and a medieval hilltop village

Some people may think that Umbria hasn’t got the same good looks or popularity as its flashier Tuscan cousin, but its rolling hills and scattered lakes do have one clear advantage over what’s rightly known as Chianti-shire – you won’t find hordes of braying toffs unloading hampers of champers from the boots of their Chelsea tractors out here. You’re more likely to find some crumple-faced old farmer humping crates of olive oil out of the back of a battered Fiat, whilst the silence is broken only by the chirrup of unidentified birds, the gentle stir of olive leaves and poppies nodding their heads in the breeze.

At Camping Il Falcone you get the olives and poppies, but it would simply be uncharitable to describe owner Carlo Valeri as a crumplefaced old farmer. He’s far too young and chipper. Mind you, he does harvest the olives from the trees that are planted along the terraced rows of the campsite, though he claims there’s only enough of the resulting oil for ‘family’.

The site at Il Falcone is a lasso-shaped slice of hill, terraced between youngish olive trees and dotted with crimson poppies. Caravans and camper vans are mainly confined to the outer reaches of the site, leaving the steep terraces for the canvas crew.

You have to ditch your wheels at the top and clamber down the hill with your gear to pick a pitch on grass as thick as sprigs of spring onion. If you choose the left-hand side of the site, there are sumptuous views down to the lake and across to the village of Civitella del Lago; one of those ancient shadowy villages populated by nothing but old folk and kittens.

If you wander over to the village and look west over Corbara lake (Lago di Corbara) you can just make out, through the heat haze, the outline of another hilltop community – Orvieto. It’s a larger version of Civitella del Lago, but houses one of the most visually stunning of Italy’s many cathedrals. In candy-stripes of grey and white stone, the massive duomo and its ornate mosaic front look good enough to eat. Inside is that marvellous church smell of old pew and cold stone mingling with centuries of burnt incense and evaporated candle wax.

Back at Il Falcone, you might – as you sip your olive-garnished martini – wonder about the name. The image of the falcon adorns the walls of the village and there’s a weather-washed old stone falcon at one of the village’s viewing points over the surrounding countryside. What does it all mean? Well, this mountainous region was once a medieval hunting ground. While our Norman ancestors were busy breeding racing pigeons and stick-thin whippets, the Italians were pulling on long leather gloves and feeding bits of minced-up field mouse to beaky birds of prey. You’re unlikely to see any now, though, as the locals have taken to the more sedate pursuits of growing olives and raising kittens. As evening falls and the suns sets directly behind the village, sinking through the smoke from BBQ fires, you’ll spot little geckos darting around your feet, looking for a warm rock for the night, and thanking their lucky stars that all the hungry falcons have gone.

Olive-trees and some oaks see to it that there is a variety of shady and sunny spots, though motorhomes might have trouble to find a suitable sport among the low olive trees. There is one well-maintained block with good showers (though only 3 each in the men’s and women’s), plus separate clothes- and dish-washing areas. The site has a kidney bean shaped, non-chloride swimming pool. There are several stone BBQ pits available to use.

Thirty miles down Autostrada 1 at Bomarzo is the Parco dei Mostri (Monster Park; www.parcodeimostri.com). Dating back to the 16th century, it’s a weird collection of stone monsters and woody groves set in a ‘sacred wood’, aka the grounds of an old estate. For a little luxury Brush off your plummiest wine-tasting phrases by sampling some bottles of Orvieto Classico, the local tipple, which dates back to the time of the Etruscans. It’s available in most places, especially Orvieto itself. Quaff a glass, or 2 or more, and practise saying ‘Mmmm, it’s as lively as a wet spaniel’.

A tiny bar (but with really cold beer) is onsite along with a small shop where you can buy wine grown by the campsite's neighbour, Barberani. They're a real treat. Last year Carlo also bought a small pizzaoven so you can order fresh pizza for lunch served directly to your pitch, provided you remember to order the night before. Within walking-distance you can enjoy more pizza at pizzeria Mangi & Bevi and, in the same street, renowned restaurant Trippini's also serves up excellent local cuisine. In Montecchio you will find La Locanda – top food and fair prices – or head to Orvieto to further indulge. Maurizio’s (00 39 0763 341 114), just by the duomo, serves a great ‘taster’ menu for €30 – Umbrian cured meats and entrecôte steak cooked with Sagrantino wine. For coffee and snacks try Café Barrique at 111 Corso Cavour (00 39 0763 340 455). Both are incongruously modern for such an old place – but nice all the same.

In 1997 we decided to start a small campsite on the basis of this wishlist: a quiet place to enjoy a holiday, no animation, a not too large swimming-pool, clean amenities, in the middle of beautiful nature but within twenty minutes of the A1 (Firenze-Roma) and ... with a spectacular view. We found the right spot in Civitella del Lago at an olivegrove, and now we believe it is a splendid place to pitch up and read a book under one of the olive-trees, look at the birds, enjoy a cappuccino at the terrace with a 30-mile view, take a dip in the non-chloride swimming-pool and just relax and let the world go on. Please don't take this for granted and read the reviews by our guests on our website (which by the way is completely new and has a lot of pictures).

Low season: paradise, fresh nights, loads of space around you, poppies in spring. High season: the campsite's profile attracts people who appreciate a quiet spot and respect other people's privacy, mostly a mix of young or elderly couples and young families. We have no animations, so, even if we are booked up, it is quiet. Some people even find it a bit boring. Sorry about that. Cool nights and even if it is hot, always a breeze from the lake. Very few insects.

The article says you have to leave your car at the high end of the campsite, but that's not entirely true if you want to pitch up in the lower parts of the campsite: throughout the campsite we have created three areas where you can park your car. Only for higher-up tent places on the lefthand side of the campsite you have to drag your stuff up about 15 metres. Once more: sorry. Your reward will be shade until lunch, a 30-mile view and the evening-sun.

You don't really need a car to go out for lunch or dinner. Within walking-distance you can enjoy excellent fresh pizzas at pizzeria Mangi&Bevi and nextdoor in the same street you will also find the renowned restaurant of Trippini's. In Montecchio you will find La Locanda: excellent food and fair prices. Last year we also bought a small pizzaoven and you can order a fresh pizza for lunch at your own pitch if you let us know the night before. In the shop you can buy wines of our neighbour, Barberani. They're a treat.

Come off the A1/E35 main road between Florence and Rome and just past Orvieto take the SS448 towards Todi. After approximately 3 miles (5 km) turn right up the SP90 towards Civitella del Lago. As you approach the village, veer right and follow the road round the hill (towards Melezolle). The site is signposted to your right.

Bus from Orvieto only gets here once a day. If you're planning to stay longer than three days, give me a call and I'll pick you up at Montecchio, no problem. You don't need a car for shopping or visits to the two restaurants that Civitella has.