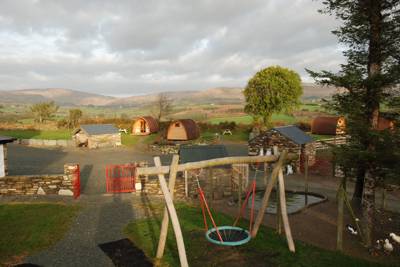 Top of the Rock Pod Páirc

A pod-tastic West Cork campsite that really is 'A Place Apart'
From 400km above the planet, there are few sites that draw the eyes of orbiting astronauts more than the prominent peninsulas of West Cork. Like a reversed mirror image of Scotland's Outer Hebrides, this south-west corner of the Emerlad Isle is adorned with a series of enchanting islands, secluded coves and wave-battered bluffs. The three main peninsulas (Mizen Head, Sheep’s Head and Beara) resembling outstretched fingers, seem to offer the hand of friendship across the Atlantic: next stop; Manhattan – a passage many an Irishman and woman would have taken in years gone by. And while this singular stretch of coastline at the southern leg of the Wild Atlantic Way is breathtakingly beautiful, the lush green interior of the region is every bit as dramatic. Little wonder then that this is Ireland's walking capital, with scores of ramblers following in the fabled footsteps of 6th-century saints along two of Ireland's most famous walking routes – St Finbarr's Pilgrim Way and Eastern Sheep's Head Way. And if this is the promised land for Irish walkers, Top of the Rock Pod Páirc is undoubtedly its cathedral.

Situated in the Ilen Valley with spectacular panoramas of the Castledonovan hills, Top of the Rock in Drimoleague has been a meeting point for journeying pilgrims for centuries. On the site of a former dairy farm, third generation owner David Ross and his wife Elizabeth have transformed this humble hillside hideaway into a multi-purpose walking centre and unparalleled West Cork camping destination. The seven timber camping pods (crafted in neighbouring Kerry) are dotted around the site in a variety of tree-fringed locations. As well as all the features of the standard pods, the two luxury glamping options, 'Celtic' and 'Orchard', have bedding supplied for the double beds. All the rest come equipped with double bed, a toilet and handwash basin, mini kitchen, dining table and a pull-out sofa and outside picnic table – all you need bring is your bedding... and, of course, a decent pair of walking boots. There's a purpose-built paddock for campervan-atics, and with just two humble yet lovely patches set aside for tent campers, this place is never likely to get overcrowded.

Facilities here are more than adequate with the ample block housing immaculately clean toilets, showers and a laundry, plus a games room for those inclement days. The aforementioned walking centre is brimming with local information and maps – it's panoramic views of the surrounding hills, enticing you to climb, make it the perfect base for planning your hike.

While not as active as it's Shorthorn herd heyday, Top of the Rock Pod Páirc is still a a fully-working 20 hectare farm filled with mooing cows, bleating sheep, a hungry donkey that the kids can feed, and a very friendly sheepdog called Daisy.

And while there's plenty of natural splendour and outdoorsy activities in the immediate vicinity, the wilds of West Cork and the surprisingly cosmopolitan, foodie-friendly coastal towns mean a more dedicated exploration of the region is a must. The locals, with a wry smile and that inimitable West Cork conviviality will tell you their's is “A Place Apart”. And once you've settled in at Top of the Rock, you'll soon believe it too.

Each pod has its own garden with picnic table and car parking space. The large amenity building has a toilet and shower block, communal kitchens, laundry room, games room, and a reception/gathering area seating up to 60 people and featuring plenty of local information and maps. There is a children's play area adjacent to the communal campfire/BBQ area. Guests can help feed the farm animals.

Pod campers – yes. Caravans – no. There is also limited space for tents and camper vans. Small dogs permitted but not in the pods.

The farm is ideally placed for any number of fantastic walks, most notably the Sheep's Head Way and St Finbarr's Pilgrim Way. The latter's 37km walk starts at Top of the Rock, leading to the titular saint's 6th century island hermitage at Gougane Barra. For anyone with angling on the agenda, the River Ilen flows along the bottom of the site and runs rich with salmon and trout (permits may be required). The park lies on at the southern end of the Wild Atlantic Way via Bantry, which means there are no shortage of coastal delights in the vicinity. Take a trip to spot seals and dolphins at Skerin Island, or round off a day at the sandy Inchidoheny Beach with a wander into boho Clonakilty – the kids will love model railway village (00353 23 883 3224). Cork, Ireland's second city, is around an hour away – be sure to explore the charming hillside neighbourhood, Shandon. For history buffs, the harbour town of Cobh, final port of call for the Titanic is well worth a visit. While the Blarney Castle & Gardens (00353 21 438 5252) offers that Irish tourist rite of passage – kissing the Blarney Stone!

Though small, Drimoleague is blessed with a bounty of boozers – ask David for his pick of the four. Foodwise, Kalbo's Cafe (00353 28 21515) is a Skibbereen institution. It boasts a vibrant menu using ingredients sourced from the fine array of local artisan producers. Experience the best of them at A Taste of West Cork food festival, every September. Kinsale (around an hour's drive) is Ireland's gastro capital, hosting its own Gourmet Festival every October. The harbourside Man Friday (00353 21 477 2260) is one of the more upmarket offerings, but the delicious seafood is worth the prices. Cork's English Market is a must for all foodies. Founded in 1788, this grand Georgian building is a draw in itself, and the wealth of wonderful produce on offer means you can stock up on Irish delicacies like drisín black pudding and specialty farmhouse cheeses from On the Pig's Back. For those for whom food is more than just sustenance, the world-renowned Ballymaloe Cookery School (00353 21 464 6785) lies in the county's east. Run by Ireland's celebrity culinary dynasty, Darina & Rachel Allen, the Shanagarry-based school hosts short and 12-week courses in the sumptuous surroundings of its 100 acre organic farm.

On the ring road around Cork city follow signs for N71. At BANDON take the R586 to Drimoleague. Turn right at the pharmacy in the village center. Follow the signs for one km to the Top of the Rock on your right beyond the crossroads. Campervans should take the longer route from the west end of the village.