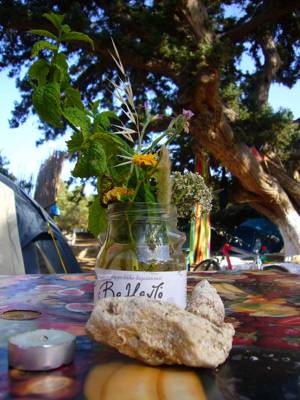 The campsite oozes ‘escape’ andthe management couldn’t be more friendly
Clambering off the boat in the whitewashed harbour of this diminutive Aegean jewel you can hardly believe your eyes. Everything you see is Greeker than Greek: old fishermen with crinkly faces and Charles Bronson eyes, cats stretching in the shadows, fruit spilling from colourful crates, plus an azure sky pure enough to melt the heart of a Mississippi lifer. Welcome to Antiparos, possibly Greece’s best-kept secret.

It would be breaking a promise to Theo Kalygros, son of the owner of Camping Antiparos, to disclose who’s been quietly buying up land here to hide away from the paps. But let’s just say that Antiparos has attracted its own pantheon of A-list deities.

The central, pedestrian-only street is a curious mix of tavernas, stylish cafés, home-made ice-cream parlours and boutiques offering anything from jewellery made just for you to – curiously – fairies. There’s no explaining it, but these nowyou- see-them-now-you-don’t little winged people pop up on every bougainvillea-clad corner.

Wandering around the ruins of the old castle, which intimately hug the town’s backstreets, you get a chance to soak up the history of this proud idyll. Back in the 15th century the island fell prey to pirates, who used it as a base, so the locals built a near-impregnable squat castle to keep them out – yes, even Cap’n Jack Sparrow is banned. Defending themselves against a more contemporary nemesis during World War II, Antiparians were amongst the first Greeks to pledge themselves to the cause of the Resistance, and there’s still a sense of proud independence today.

No less enchanting is Camping Antiparos. Pitch up under a tangled canopy of cedars or find a secret spot in the site’s bamboo field. OK, so the facilities are a touch basic but, to be honest, that’s all part of the place’s charm.

Theo can show you grainy footage of music festivals and football matches at the site back in the seventies; an endless summer of music and flares, afros and super-8 glare. Maybe the stoned ghosts of those hippies are still lurking somewhere in the ether or gazing up at the enormous 400-year-old giant cedar twisting its stairway to heaven, but music and freespiritedness is still a feature, with Theo organising festivals and impromptu jam sessions for visiting troubadours.

There are three main beaches on Antiparos: the nearest is to be found through a weaveworld of paths running through the dunes and vanilla-scented scrub. And if you like to don your nothing in particular for beachwear, then you’re in luck – this first beach is of the naturist variety. But if people decked out in their birthday suits give you the willies, then head for the beach beyond the windmill, just past the edge of town.

Camping Antiparos’ restaurant is a honey-pot of home-made indulgence (try the wonderful squid stuffed with rice and raisins), so a stay without a night or two sampling their fare would be remiss. Kindly Mrs Kalygros, when she’s not alchemising delicacies to melt your taste buds, is usually found benignly knitting. However, she’s well known for secretly pressing home-made biscuits into your hot, sticky palm, too; it would be rude to refuse, wouldn’t it? It’s also a tranquil place to sit and chat with the eclectic mix of visitors, or simply to sit and listen, like the Greeks do, to the melancholic chords of the bouzouki.

Myriad options for pitches: under the trees, in the reed fields…Bamboo huts also available to hire. Launderette, 24-hour hot water, mini-mart, bar, self-catering facilities, plus what must be some of the best home-cooking in Greece.

Take the 4-hour ferry (€29) from Piraeus (Athens) to Paros (or a domestic flight from Athens to Paros), then catch the 5-minute shuttle boat to Antiparos at the tip of the island. The campsite is a 10-minute walk from the harbour.