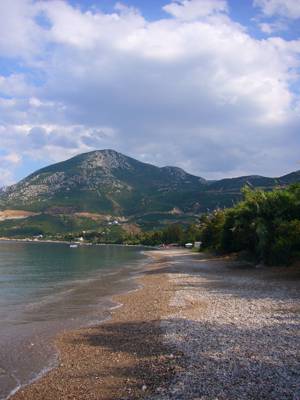 The proximity to the beach (anycloser and you’d be underwater)
Welcome to the Peloponnese, land of orange groves, myths and Heracles. If you need your fix of ruins and classic tales, this place has a higher concentration than anywhere else in Greece. It’s spooky going past the ruins of ancient Tiryns – the dreaded palace where Heracles had to return on completing each labour, only to be given another.

You’ll see the sign for Tiryns as you head towards sleepy Epidavros. For most of the year this water-lapped town is a somnolent tableau of old-timers flicking their worry beads at the end of the jetty. Then comes July and the population explodes with the fireworks of the annual festival of theatre; culture vultures from across the globe come to witness the spectacle of Aeschylus, Euripides and Sophocles performed Greekstyle in the two ancient theatres. Of the two theatres, the largest is amongst the best-preserved in Greece and has hosted some famous names and performances during the 20th century. Built in the 4th century bc in amphitheatre style, the acoustics are astonishing; actors can play to 15,000 people at a time and everyone can hear a pin drop, even from the very back.

A 10-minute wander from the town, through a shady grove, past the small theatre, and along the beach, and you’ll find Nicholas Camping. Formerly an orange grove, its mulberry and orange trees provide plump natural arbours in a series of enchanting, sleepy hollows. And whilst the site might lack tennis courts, swimming pools and the sophistication of some campsites, Nicholas more than makes up for it with its luscious setting. How many campsites have you been to in which you can pluck a ripe orange from the leafy canopy then plop into a silk-calm bay a stone’s-throw away?

Nicholas is run by husband-and-wife team, Christina and Yiannis Gikas. Christina left the hubbub of Toronto to re-discover her Peloponnesian roots, and looking out through the palm-studded gardens, taking in the orange-scented air as you gaze at the nearby sea, it’s easy to see why. She can organise visits to the theatre and diving trips for you.

If you fancy yourself as a bit of a Jacques Cousteau, then go exploring scubastyle. Just down the beach there are the remains of a sunken city, the victim of an earthquake and subsequent tsunami in ad 175. Follow the curve of the beach away from town, don your mask and weave past sea urchins with Sid Vicious hairstyles lurking on the squat underwater ruins. You never know, you might just find something exciting; there are over 1,000 shipwrecks in Aegean and Ionian waters, and potentially so much hidden treasure that most wrecks are off-limits to commercial divers.

If you need more than underwater entertainment, take yourself off to nearby Nafplio – a beautiful old town choking on Venetian architecture, bougainvillea and tamarind trees. The shops are tasteful and sometimes intriguingly quirky, with narrow little walkways for you to escape from the sun in glorious midday shadows. Take your pick from half a dozen great restaurants, then after lunch work off the calories with a brisk walk up to the Palamidi (the fortress ruins) and a refreshing dip in the sea on the other side of the hill. Nafplio has become something of a favourite with Athenian urbanites. If you spend an afternoon here you’ll soon see why they like to keep it a secret from the package crowd.

There’s a clean shower block, laundry facilities, chemical toilets, BBQ, mini-mart, wireless internet, 24-hour hot water, a small café and restaurant, fride-freezers for use, a swimming pool and safe beach swimming. The campsite is 2.5km from the village centre and it’s near to a bus stop.

Head for the theatre, lunch by the pretty harbour in town or drive to Nafplio for a taste of Aegean chic. Epidive Center (00 30 275 304 1236; www.epidive.com) offers dives at all levels, plus introductory courses for beginners.

The Mouria Restaurant, next door, is a favourite haunt for visiting actors, who sit beneath the mulberry tree practising lines between mouthfuls of moussaka. The menu leans heavily towards seafood. The food is fresh and delivered with a smile.

If you’re driving from Athens take the E94 motorway and drive via Argos and Nafplio. Then follow signs for Nea Epidavros. If you’re taking public transport you’ll have to change at Nafplio and catch a local bus.

Swimming among the oranges!

Quiet, beautiful and idyllic; situated in orange groves. Camped next to the sea and woke up to the sun shining on our tent. Friendly and helpful staff as well as some wonderful Greek cuisine at the taverna next door. Facilities are clean and well-maintained. Village of Palea Epidavrous has bakery, fishmonger, butcher and small supermarkets.
Show more