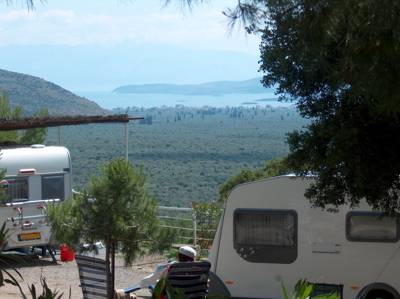 One of the most stunning views inGreece. Classic.
Climbing the scarily steep, twisty road towards the famous oracle at Delphi is an enchanting experience, and you’re in excellent company, too. People from the times of Heracles to Alexander the Great have made the same trip during the last 3,000 years. By night, the mountain eyrie of Delphi village glitters like jewels heaped at the feet of the mythic Pythia (clairvoyant crones) in the hope of soliciting a favourable reading. This might be somewhat different from checking out your horoscopes in the evening paper.

Myth has it that a serpent or dragon called Python once lived at Delphi before being slain by Apollo, the sun god. Thereafter, for nine months of the year he uttered prophecies by whispering through a laurel bush. A rich Athenian family built a magnificent columned temple in his honour and people came from far and wide to seek answers to their problems. Perching over the hallucinogenic fumes billowing from a fissure within the mountain, the Pythia (withered clairvoyant crones) were thrown into ecstatic raptures – think Russell Grant in drag – whereby they were able to divine the future.

The amazing ruins are more than worth the arduous climb; you almost feel as if you’re in a Ray Harryhausen movie with plasticated Minotaurs and Cyclops heading your way. And if you make it as far as the stadium at the top, you’ll rightly deserve a refreshing sorbet at the gelaterie by the ruin’s entrance. Crouch down in the narrow chamber of Apollo’s temple and mouth your questions into the ghostly darkness. Like, why do our Japanese friends wear Darth Vader macs and gloves in 30°C heat? And why is the euro so supernaturally strong against the pound? Answers came there none.

Four miles down the road in Chrisso village, Chrissa Camping boasts an unfeasibly beautiful view of the silvery-green olive plain below, broken only occasionally by spears of cypress trees. The site’s quirky central building could be a Bond villain’s hide-out. In fact, there’s an almost palpable seventies vibe here – it’s quite easy to imagine Roger Moore in a safari suit popping up amongst its geometric lines, armed with a quip and a Beretta.

The balconied restaurant, reeling in brightorange orchids, is the perfect place to rest your history-embattled calves, nurse a Mythos beer and watch one of the most divine sunsets in Greece: the light turning pastel pink and salmon as the sun goes down over waterside Ieta village. The food complements the view, with a simple traditional Greek menu plus some Italian dishes thrown in for good measure. You can stay in one of four Serengeti-style cabanas (they can sleep four), whilst for all you tentpurists there are more terraced pitches than the proverbial hanging gardens. Just be warned, though, that with the gravel earth harder than a Minotaur’s hoof, you’ll need a pretty sturdy mallet in order to hammer those tent pegs in.

Facilities are good, with a decent mini-mart and good-sized shower block, plus laundry and Internet. If you need any information about anything at all, the best source is Chrissa’s manager, Katerina. Her English is terrific and she’s full of ideas about how to make your stay a memorable one. Give yourself some time to cool off in Chrissa’s sparkling swimming pool before taking a trip to explore the diminutive two-tiered village of Delphi, which clings precariously to the mountainside. The village itself holds plenty of other less-arduous diversions in the form of boutiques and restaurants, their windows dominated by handsomebrowed verdigris gods.

High up in the clouds here, you may even start some of your own whisperings – here’s one suggestion: Chrissa Camping is, like the oracle, one of a kind.

Visit the ruins and museum of Delphi, with its artefacts from the golden days of Greece. Or head to the beach in neighbouring Itea, 10 miles (16 km) across the olive grove.

The campsite’s restaurant is great, but you’ve come here for the ruins, let’s face it. And Delphi village does not disappoint gastronomically either. Stop at one of a clutch of tasteful tavernas. Head for Epikouros (00 30 226 508 3250), the most stylish restaurant in town. This well-situated watering hole serves up wild boar and onions as its house speciality

By car: take the E962 towards Livadeia, then head to Itea. Chrisso village is below Delphi Buses from Athens travel directly to Delphi and can drop you outside the site if you ask the driver.