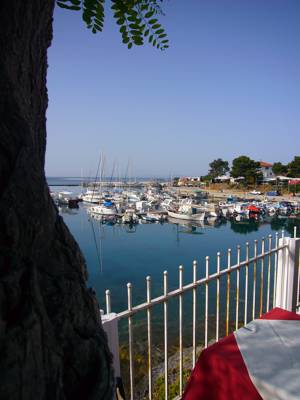 With its view, private beaches,distinct cuisine and charming, old-schoolmanagement, you can’t fault it
The charming little town of Neos Marmaras is kissed with blue waters and bobbing schooners. On Thursday mornings a fruit-and-veg market bubbles to life by the palm-studded wharf, and it’s easy to feel like one of the locals as you marvel doe-eyed at calamari and haggle over your pot of indigenous honey.

Interesting to think, as you gaze out at the distant wooded hills, that 2,500 years ago this was Alexander the Great country. Macedonian people are fiercely proud of this fact, too, so don’t be surprised if their grasp of history is greater than the average classics student. If your local hero once ruled half the world before he was 30, you’d probably be the same.

Camping Areti, just 7 miles (11 km) down the road, is sleepier than a rakilaced bouzouki player; the pace here is joyfully slow. Its spotless taverna is both welcoming and atmospheric, with locally caught fish sizzling away on the grill to the acoustic accompaniment of crickets and the Aegean lapping right near your table. On a clear morning the distant peak of Mount Olympus beckons you to breakfast with the gods. And if they could relocate, well they’d probably want to plant their trident in these pine-scented waters.

Areti sits amongst acres of mature eucalyptus trees and hibiscus-bordered pathways. You can throw up your tent in various locations, depending what takes your fancy. If you’d like to be near enough to the water to smell the salty air, then pitch up near the sea beside a sugar-sand beach, dramatically screened by gnarled olive trees. For the less watery inclined, head for the back of the meadows for a little more privacy.

If the heat becomes too much, try a night off in one of the Crusoe-style log cabins. There’s about a dozen of them scattered across the site, choking in orchids and flora. Inside they’re cosy and functional, with a kitchenette, separate double bedroom and WC, with an extra berth that could come in handy for a smaller person.

You’ll find that Areti’s mini-mart is well-provisioned, plus there’s a wealth of amenities including a kids’ playground and tennis courts, as well as hidden recesses for cheeky romance and inviting lookout points with benches pointing seaward just begging to be sat on at sundown. It’s just the kind of quiet, forgotten patch in which you can regain some sense of yourself without fear of being disturbed by anyone.

If you’ve had enough introspection and philosophising and are gagging for something more physical, then challenge yourself to the swim to one of the three deserted islands across the cobaltturquoise- chequered bay. It’s a fair old distance, but then it wouldn’t be a challenge if it wasn’t, would it?

Two and a half thousand years ago, a stubborn little collection of states known as Hellas were about to be disciplined by the Persian Empire. The attacking armada was stayed, albeit briefly, by the alleged sea monsters in the foaming reefs. These days it’s a little safer to venture out into the sea. And if you want to see more of the island life beloved of the locals then talk to Giorgos, the softly spoken manager, about chartering an old schooner for the day to take you round the triple peninsulas. Before you know it you’ll be hailing everyone with Yassas and drinking ouzo like a local.

Jet-ski and windsurfing are available on demand. Nearby Nireas Diving School (www.nireas.gr) can be contacted for local dives. Charter an old boat (it takes up to 30 people) plus a captain to take you on a trip around the triple peninsulas. It costs about €25 per person and food is included.

From Thessaloniki head for the Sithonian Peninsula via Neo Modenia. Kassandra is the first peninsula; avoid this and push on to Sithonia, the second. Seven miles (11 km) beyond the turn-off for Neo Marmaras you’ll find the sign for Camping Areti. It’s nestled at the bottom of a pine-clad road. On arrival at Thessaloniki head for Chalkidiki bus station to catch a bus to the Sithonian Peninsula. Make sure you’re headed for Sykia or Neo Marmaras and let the driver know where you’re going so he can drop you off. If you end up in Neo Marmaras then you’ll have to get a 10-minute cab to the campsite.

We are a family of 4, with 2 young energetic boys. We cannot thank Georgios and his family and colleagues enough for the welcoming stay at Areti it really has been a heavenly holiday. We stayed in a bungalow located in enchanting gardens with shade, colour and wildlife aplenty. Bats, tortoise, fish, butterflies just examples. We were all happy to chill on the beach, play, swim, snorkel, kayak to one of the islands, and even catch a spot of tennis and volley ball. At night we looked for the bats and enjoyed the sunsets. we enjoyed fresh bread and croissants for breakfast and lunch from the site shop which has all you can need. The restaurant has a lovely food at a good price and the ice cream is gorgeous! Thank you we will definitely be back !
Show more