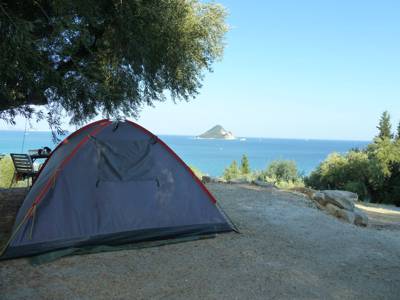 Great cuisine and arguably the bestview of any campsite in Greece
Zakynthos, or Zante, as it’s known locally, is one of the more emerald isles in the Ionian Sea. In times gone by it was called ‘the Venice of the East’ because of its buildings, which resemble something out of a Canaletto painting – you almost feel like casting about for a gondola to take a ride in.

Like many Greek islands its tenure has been mixed and colourful, running through Roman, Ottoman, Byzantine, Turkish and British rulers. The old town of Zante was reduced to rubble in the earthquake of 1953, but luckily the locals loved it enough to do a great restoration job, one that St Dionysios, the island’s patron saint, would be justifiably proud of.

Every August the islanders hold a festival to celebrate their patron saint St Dionysios (aka St Dennis). This night-time festival sees the atmosphere charged with Greek Orthodox fervour as the long-deceased, strangely preserved, saint is led through the candle-flickering streets safe and snug in a glass cabinet – rather like an old-fashioned Pope-mobile.

But, before you get stuck into Zakynthos’ cultural highlights, you’ll be needing to set up camp. If, on hearing Tartaruga Camping’s pack of ferocious guard dogs heralding your arrival you think Cerberus is at your heels, be reassured, you couldn’t be further from Hades; in fact, you may have just happened upon the Elysian Fields.

Run by Veit and Anna Santner, Tartaruga boasts one of the best views of any campsite in Greece; you can gaze down at the epiphany-inducing sea from the giddy heights of their al fresco restaurant, unblemished but for the odd deserted island and occasional puttering fishing boat.

As if to qualify its pedigree, loggerhead turtles have chosen the turquoise waters beside the campsite as a safe enclave in which to play their mating games. There’s a floating platform to swim out to and wait on for the turtles to come, or use Veit’s goggles and fins, which he leaves by the rocks for anyone to borrow. There are old diving shots from the seventies pasted on the walls of the basic eaterie, which also doubles as a TV room when there’s a sporting event on.

In summer, when the witchy olive trees are crawling with children, there are weekly table-tennis tournaments, with ice cream for the lucky winners. Anna is a brilliant cook – if food is made with love, then Aphrodite has certainly taken up residence in her kitchen. The menu contains whatever Anna brings back from her daily visit to nearby butchers and fishermen, and you can be sure there’ll be plenty to get your taste buds going.

The mainland feels a long way away, even though you can see it just over the water. So, too, do the trampled, over-harvested tourist traps like nearby Laganas. But here on the campsite, amongst the chattering of cicadas, the hypnotic scent of thyme and calm whispering of pine trees, you could easily have travelled back 30 years. And since you’re on the island’s southern tip you benefit from a much-needed breeze.

When it comes to putting up your tent, you have a considerable choice of pitches. You can try a spot in the shadow of pines, the light around you dappled like a Monet painting; or set up near the beach where a fallen olive tree, bleached whalebone-white by the sun, lies surrounded by sentinel rock sculptures that look as if they’ve been filched from the Tate Modern.

Zakynthos or Zante, St Dionysios or St Dennis – whichever you prefer, Tartaruga Camping is a tenters’ paradise. Come on in, the water’s lovely.

Clean communal shower block, bakery, limited mini-mart, disabled toilet, al fresco restaurant, TV room, Internet, laundry services, playground and, of course, the beach. You can play table tennis, go snorkelling, visit the peacocks or noodle about on the trippy beach before you explore this idyllic island. You can see turtles in the spring/summer.

Let Golden Dolphin Tours (00 30 269 508 3248) take you to the Blue Caves and Shipwreck Beach, a heavenly strip of fine sand bordered by high cliffs and finished off with the postcard-esque wreck of an old boat.

You may not want to leave the confines of Tartaruga after tasting Anna’s cuisine, but the Village Inn, on the waterfront in Zakynthos Old Town, is good for traditional food.

April–end-Oct; it is possible to camp between November and March by arrangement.

Zakynthos is the southernmost island in the Ionian Sea; head for Killini port to reach it by ferry. From Zakynthos town it’s 8 miles (13 km) to Camping Tartaruga. Head for Keri – there’s a sign for Tartaruga followed by a windy lane. There is a bus twice a day. A taxi costs €15–23.

I stayed here a few years ago now, so can't really vouch for what it's like in 2016, but back then (2012) it was THE best campsite in Greece. Easy swimming down on the beach and shady pitches so you don't get too hot in the sun. Hosts lovely. Highly recommend!