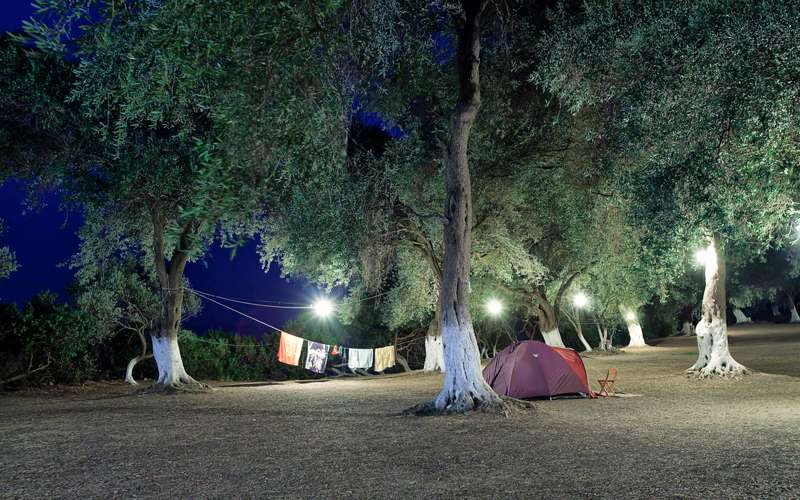 Parga could get arrested for being so beautiful, the campsite is perfectly situated and its staff are genuinely incredibly helpful
Parga’s whitewashed, Venetian-style buildings huddle on the higgledy-piggledy hillside, forming an amphitheatre of fragrant bougainvillea, magical alleyways and enticing trinket shops tumbling in profusion down to the bay. Like nearby Corfu, the town is well known for its cosmopolitan atmosphere and ultrafriendly locals. Because it’s so close to Igoumenitsa Port for ferries to Italy, the little town echoes with a cacophony of Mediterranean languages and has long been a favourite of the Brit pack.

With its freaky pillars of rock jutting from the emerald sea, the little churchcrowned island of Panagia in the bay and the sentinel ruins of a Byzantine fort on the hill, the place is beyond romantic. And it’s not just a pretty face either; you can laze away the days on a sandy beach, indulge in some water-skiing or exercise those calves in a little bargainhunting or museum-hopping. But here’s another question for the oracle – why so many hat shops in Parga? Maybe there’s a multi-headed, multiplying Hydra, or two, concealed about the place, with an insatiable headwear habit.

A short distance south of Parga you’ll find Enjoy-Lichnos Camping. If there was a Cool Camping award for the friendliest campsite welcome, Lichnos’s manager, Georgia, would surely win hands-down. This peaceful haven, set within an olive grove, has a sugar-fine pebbled beach just a stone’s throw away and is hemmed in on one side by rose-coloured cliffs and on the other by a tangle of cypress and olive trees. The water is unbelievably clear – you can see the sandy bottom when you’re floating on the surface. What’s more, the beach’s gentle incline makes it a safe place for children to splash and paddle.

Enjoy-Lichnos is well catered for, having a friendly al fresco bar and a sizeable minimart and restaurant in the main building. It’s so seventies in style you’re convinced Leonard Rossiter and Joan Collins must have filmed a Cinzano ad here. Pitches are equally close to the gently lapping sea in an RV-free field festooned with tiny amber lights; by night they look like fireflies as you cross the little wooden bridge through the pergola into the magical meadow. The 500-year-old olive trees provide muchneeded shade from the blistering sun of the summer and the very occasional rain.

Greek legends are at every turn and, if you’re that way inclined, you can hire a catamaran, pedalo or kayak and explore the famous cave of Aphrodite just around the bay – apparently she used to bathe here. Or take the ferry that putters to Lichnos beach.

Georgia speaks great English and will happily organise trips of your choice. If you fancy a bit of self-propelled time travel, whizz back a few thousand years to the days of legend by visiting the creepy ruins of the Necromantion – a 2,500-yearold oracle of the dead. Half an hour’s drive south of Parga, this hilltop haunt is reminiscent of that Tuscan graveyard in The Omen in which the pack of Rottweilers tuck into Gregory Peck’s forearm.

A short ride across the fertile, chestnutbordered plain is the turquoise River Acheron. What may now look like a beautiful, eucalyptus-fringed river was once a much-feared tributary of the River Styx, the subterranean route the dead took to Hades. The dead now travel a different route, or so it’s said, leaving you in safety to snack on fabulous grilled fish at one of the riverside tavernas before dipping your toes in the glacial blue water.

A visit to the Necromantion is the classical equivalent of a Scooby Doo adventure! Finish off with lunch by the icy River Acheron, then head up the trail and ride its rapid currents down the mountain in a natural wet ‘n’ wild environment. To a trip on schooner Captain Hook (00 30 694 488 4597). The cruise begins at Parga, taking in the blue caves and beautiful islands of Antipaxos and Paxos. Adults are €25, kids €12.50.

Situated a mile or so (2 km) before Parga, between Igoumentisa and Preveza off the E55. Driving north on the coastal road Enjoy- Lichnos is after Aghia Kyriaki on the left-hand-side. If you find yourself in Parga you’ve overshot. Catch a bus from Preveza bus station (last one is 8pm). Ask the driver to let you out at the top of the winding lane to the site.