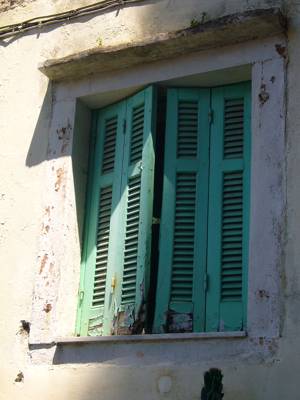 Warm hosts, peaceful settings andnear lovely Corfu Old Town
In mythical days gone by, the final leg of Odysseus’ journey shipwrecked him on the peaceful island of the Phaeacians, where the kindly princess Nausicaa took him to her palace to tell his tale, before letting him set sail on to the island of Ithaca. Nowadays, that same island is commonly known as Corfu, but you can still find the same gentle hospitality there.

This Ionian island became a major player in Greek affairs because of its handy location in the Mediterranean and when you are ambling through the old town’s sandy neoclassical buildings you’ll be sure to feel the breath of history touching your cheek. Well, Corfu’s seen a fair few tourists since the late sixties, but you can still catch a glimpse of the Greece of that era by taking random turns off the main drag. All sorts of time-stands-still scenes greet you – from the crumbling, washing-strung piazza to an octogenarian bedecked in black, measuring out her years with a string of beads. The real Greece is never very far away.

Corfu actually means ‘peaks’ and Corfu’s Old Town is sandwiched between two natural promontories on which stand two mighty fortresses, strong enough to repel the aggression of five Ottoman sieges. If you get tired of drinking frappés in the stylish cafés or haggling over evil eyes and alabaster gods, there’s a rich mix of options to take your interest. Be it water sports, walking, museum-hopping, monastery-peeping or just basking on the beach, Corfu is a large island and you can easily lose yourself in the flower-filled meadows, crags and secret, hidden coves, leaving the hustle and bustle (if the Greeks have such a thing) of the resorts far behind you.

Five and a half miles (9 km) out of Corfu Old Town and a mere five minutes from chock-full, glistening-bodied Dassia beach, is Dionysus Camping. If this is a name to conjure up images of near-naked nymphs popping grapes into one another’s mouths to the accompaniment of a lyre, you may, perhaps, be a little disappointed. But in every other aspect this serene spot, set in a tiered 400-year-old olive grove, more than justifies its evocative name.

The facilities offered at the campsite are excellent. There are two pristine shower blocks with hot water round the clock, a handsome bar overlooking a good-sized swimming pool, plus you have the choice of pitching your tent in the terraced meadows or – and these are terrific value for couples – taking one of Dionysus’s 50 well-appointed Polynesian-style cabanas or tikis.

The site is in a former olive grove run by Nikos, a warm and welcoming manager. A true Corfiot, he knows the island like the back of his hand. As well as having a wealth of printed info for your perusal, he can point you in the direction of the best beaches and charter a boat to take you up to the north of the island – or pretty much anything else that your heart desires.

During the busy months of July and August the site’s bar and restaurant host traditional Greek dancers and are buzzing with a Babel of languages. The atmosphere’s wonderfully convivial and lends itself to friendly and lengthy conversations and the formation of fond bonds. So, in that respect, Corfu’s hospitality is just like days of old.

But, unlike solo traveller Odysseus, be careful you don’t find yourself on the back of a Honda Goldwing headed for a new life in Munich with a big bloke called Hans.

These are good and include a communal cooking area, fridge, BBQ pits, Internet and laundry facilities plus mini-mart, bar/ restaurant and Olympic-sized swimming pool. The beach nearby is a little on the rocky side (but sandy Dassia beach is just a moped-ride away).

Take your own odyssey on the Kalypso Star (00 30 266 104 6525), a glass-bottomed-boat experience that takes in the underwater delights of the island’s marine life.

Earthy Restaurant Rouvas (00 30 266 103 1182) just around the corner from M&S in the Old Town, is a well-kept secret (the meatballs are life-affirming). The magical Starenio Bakery near the Town Hall Square on Guilford Street is fab for afternoon coffee and croissants. For classic, romantic, al fresco dining head to San Giacomo (00 30 266 103 0146) in Town Hall Square.

The No. 7 bus from San Rocco Square in Corfu town stops outside Dionysus every half hour. From Corfu port follow the main coastal road (to the right) north until, after 5 miles (8 km), at Tsavros junction, turn right. Just over half a mile (1 km) on you’ll find Dionysus.