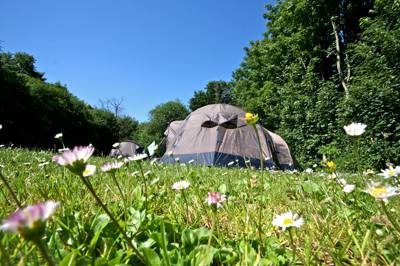 The Vulkan region may sound like the kind of interplanetary place Dr Spock might hang out in – or even hail from – but it’s not. It’s Germany’s only volcanic region, a low mountain range in a southwestern section of the Rhineland-Pfalz (known as the Eifel), which lures tourists with its water-filled craters (the so-called ‘eyes’ of the Eifel) and tantalising landscapes.

Natur-Camping Vulkaneifel lies in the centre of the region, just over half a mile (1 km) outside the village of Manderscheid in Bernkastel-Wittlich. Owner Wolfgang Moritz has been in charge for 30 years, starting it initially as a children’s summer camp and gradually expanding into a campsite for all.

Moritz, a keen advocate of Rudolf Steiner’s Waldorf Schools, submits to Steiner’s ideas of anthroposophy, though those not sold on Steiner need not worry. Apart from an emphasis on bio products in the children’s canteen, the use of natural materials around the site and a ‘free’ environment for children to be themselves, you wouldn’t notice.

The centre of the campsite is still given over to the Jugendferiendorf, or children’s village, a collection of multi-coloured huts set around a landscaped area. The camping pitches are situated along a series of quiet, green terraces shaded by fruit trees, slightly away from the site’s centre. The pitches are categorised as A, B and C, according to their size. The north side has the biggest and quietest pitches, and is the most popular with campers, though the southern pitches are perfectly pleasant, too.

The facilities are clean and modern with separate shower blocks for men and women, outdoor sinks and a small kitchen. In keeping with the child-friendly ethos, there’s also plenty of green space to relax or run around in, plus a badminton court and playground, BBQ area and a boutique tipi in a field brimming with red poppies.

This easy-going pleasantness is all in contrast to how the Eifel region was 400 years ago, when it was ravaged by plagues, witch-hunts and feuds – you know, all that cheery Middle Ages stuff. They say almost 300 people were executed as witches between 1528 and 1641, though these days you’re much more likely to be dining on a juicy steak than being burned at one.

Nearby Manderscheid is a comely spa town with 1,300 or so inhabitants. Though it’s generally coy on the sightseeing front, it does offer some convenient facilities for campers – a couple of supermarkets, some restaurants, and an enthusiastic tourist office – as well as a truly stunning castle, some sections of which are said to date right back to the 10th century.

The real draw, though, is the volcanic region, which since 2004 has been part of the UNESCO Global Geoparks. Most of the area is easily accessible from the campsite and is interlaced with a web of walking and cycling trails, some of them literally starting at the site’s front door. The Geo-Route Manderscheid, for instance, is an 86-mile (140-km) walk, which takes in a lot of the region’s highlights. Cyclists will marvel at the Maare-Mosel-Radweg path, which runs from Manderscheid along an old railway line and takes you either to the lovely town of Daun or to the beautiful Mosel river, a great place to check out some local wines. Towns like Koblenz make a wonderful stopover, as does the ancient city of Trier. As luck would have it, there’s even a road that joins the two together – the Mosel Wine Road – how totally logical. Even Spock couldn’t fail to enjoy himself here.

Facilities are good and include a large shower block, washing machine and dryer, a small kitchen for campers, kiosk in reception, badminton net, BBQ area and playground.

The site is geared towards children and families so finding entertaining stuff to do here is not a problem. The Manderscheid Tourist Board (0049 65 72 93 2665) run regular geological excursions around the area, and the site works with a range of independent companies to arrange everything from raft-building and orienteering courses to climbing, hiking and cycling. There’s also a wildlife park at Daun (0049 6592 3154). Try a Landrover volcano safari (0049 65 92 95 130) or take a plane ride to see the ‘eyes of the Eifel’ from above (0049 65 92 2976).

The canteen serves tasty, bio-friendly meals, but only at specific times (breakfast 8–9am; lunch at noon; dinner at 6pm). You can also cook in the dedicated BBQ area. For farmyard delicacies head to the Vulkanhof in Gillenfeld (0049 65 73 9148), which has a nice selection of mustards, jams, goat’s cheese and the like.

You can catch a train from Köln (Cologne), Trier or Koblenz to Wittlich, then take a bus from there to within 500 metres of the site – ask for Manderscheid-Dauner Strasse.

In spite of the poor weather at the start(there was a downpour while we were putting up the tent), we thoroughly enjoyed our stay here.  The site is well-organised: like all the German sites we stayed on, they want payment in cash, but at least they tell you the damage when you arrive, so that you can be prepared.  As everywhere, the local bakery provided excellent bread.  As we knew from the description, the campsite is alongside a children's holiday village, but apart from the noise of them enjoying ourselves, it really wasn't a problem at all, and we had hardly any contact with them.  The site is very easy to find from the motorway, not far at all, and set in beautiful countryside in the village of Manderscheid, which has two castles.  Great for exploring, particularly around the crater lakes which give the area its name of Vulkaneifel.