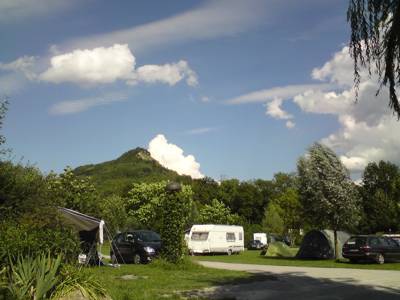 A relaxing, countryside feel in a handy urban location
Jena is a bustling place. A university town since 1558, it has attracted its fair share of cultural giants over the intervening centuries and became a centre for science in East Germany – a clutch of top museums and the world’s oldest public planetarium attest to that. It’s still the students that give the place real life though, a thriving young community who inject a lively buzz into crafty little cafés and hip coffee houses. Beyond the glowing evening bars, however, the backdrop is anything but urban. Muscular limestone hills hug the surroundings, topped by dark green trees and divided by the lazy river Saale that slithers through the countryside into the very heart of town.

Treading this precise boundary between tree-clad seclusion and buzzing city get-up is Campingplatz Jena. Owners Sabine and Steffen positively beam as they cast their gaze around the place and conclude it offers, “semi urban camping” – it’s not a phrase we disagree with. From the campsite entrance a tramline and cycleway zip you into the central market place and the most picturesque old quarter of town, 2 kilometres away, while staying put leaves you lazing in the grassy idyll that is the site itself, a slice of country on the edge of the city.

Made up of a flat, grassy, 48-pitch space, the camping meadow here boasts a healthy dotting of mature dappled trees, electrical hook-ups and a separate vehicle-free camping area for tents only. The latter spot is a favourite for passing cyclists, journeying the Saale Cycle Route, a 410km trail from source to confluence and one of the countries most diverse, demanding and spectacular routes. Facilities are on the older side and relatively basic, but all are immaculately kept and suit the established, laid back feel of the site where a relaxing atmosphere is matched by the chilled out owners.

Sabine and Steffen’s reception sums the place up nicely. Housed inside one of the town’s historic old trams it’s a quirky information stop with everything you need for swatting up on the local area. In the morning, the smell of fresh breading oozes from the windows where tram goers once pressed dreamy faces against the glass and a few nights a week the area out front, ordained with a handful of picnic benches, becomes the setting for campsite barbeques sizzling up local sausages.

If you're more county mouse than town, don’t feel every day has to be spent within the compact Jena centre. The campsite is at the foot of mount Jenzig, the highest in the area, and a climb to its summit reveals spectacular views of the settlement below as well as far reaching vistas of the upper Saale valley. The region is still blessed with a climate mild enough for orchids and vines to thrive, and the flanks of Jenzig are segmented in a couple of small areas where tiny, amateur vineyards are still at work. The rest of the valley leaves acres to explore, dotted with ruined castles and historic riverside dwellings. Be back in time for an evening campfire before bed and rise early enough to swim in the neighbouring municipal pool.

Toilets, hot showers (free), drinking water taps and all the basics onsite, including laundry. There is a large fridge freezer for all to use and 1 free hour of WiFi for every guest, after that you have to pay. Authentic 1967 airstreams are available for rent, imported from the US and restored by hand locally. They feature a living area with sofa and pull out dining table, a kitchen with large fridge, gas stove and double sink, a bedroom and a bathroom with sink, toilet and shower. Boats and canoes can be rented from the campsite to use a few hundred meters away on the river Saale. Plenty of wildlife onsite (not just their 2 cats) and no rowdy organised entertainment.

The campsite is just 2km from the city centre, a green and natural place with a nice mix of nature and urban bustle. If you don't fancy the walk there is a tram stop 200m from the site entrance or pedal along the cycleway. Next door to the campsite there's a public swimming pool (open May–Sept) or stay above water on the river Saale, running through town with boat trips downstream – on a nice day you can also wild swim here. From the centre you can continue on the cycle routes taking in towns and castles of the region – try the route to Weimar, 20km away, one of the most picturesque spots in Thuringia with interesting memorials, museums and parks to visit. Hiking, though, is perhaps the main highlight. From the campsite you can join a stretch of a huge 100km-long hiking path that travels all around the river valley with spectacular views, forests to explore and a few pleasant restaurants for those essential pit stops!

The amazing camping kiosk is located in an old converted tram and has a shaded area out front with picnic tables to relax on. There is fresh bread and breakfast every morning and homemade cake and snacks available in the afternoon. Twice a week the campsite also runs a BBQ with local meats and produce, as well as hefty jugs of juice and water for kids. For all other choice head into town and try some of the eclectic eateries. The local university sees to it that there is plenty of choice and a load of cool, hip cafés to relax in.

From the motorway A4 (Dresden-Frankfurt) Take the exit Jena Lobeda-Ost and drive towards the city centre. Cross the hall and turn immediately right. Follow the main road along the railway embankment to the 2nd set of traffic lights and turn right towards Eisenberg / BAB 9. Continue on this road and, at the next traffic lights, turn right over the Saale in the direction Eisenberg (note the signs 'Camping Jena'). After crossing the hall go left at the 2nd set of traffic lights. After about 100 meters down the hill the entrance is on your left. The nearest train station is Jena-Paradies, 2km away (ICE Berlin-Munich), while other public transport – a bus and tram station – is just a couple of hundred meters from the campsite entrance.