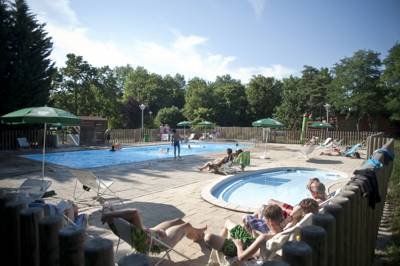 Characterful caravans in an idyllic and flowery setting

This is Beaujolais country around here, home of the first wines of the season. It’s a bit like those MPs’ constituencies that rush through the vote count on election night in the UK in order to be the first to declare a result; the wine in these parts is famous for being the first to be cracked open after the harvest.

The grapes are picked and the wine is made, but it’s fermented for only a few weeks before the Beaujolais Nouveau officially goes on sale on the third Thursday in the month of November. And there’s just as much of a race to get the first few cases of wine out and into the tasting salons as there is to declare Sir Winthrop Cattlebray or Arwyn Jones the duly elected MP for Camperstown Central. It’s strange, then, with all this emphasis on speed, that the Beaujolais vineyards are one of the few in France (Champagne and Châteauneuf-du-Pape are other examples) where grapes have to be harvested by hand. Bet you didn’t know that. Quite why is anyone’s guess, but it’s nice to know that it’s not all squish-squash and away you go.

Thankfully there’s been no rush to put together the collection of gypsy caravans, here, at Les Roulottes de la Serve. The first one came courtesy of the owner of a local merry-go-round and looked so good that Pat and Pascaline Pain, owners of what was then a derelict 19th-century farmhouse, decided they’d like some more. So as they renovated their home they added a couple more authentic roulottes and decorated the whole place with trinkets they had garnered from their travels in India and Africa. And the result of this process, which has come together over the years, is really worth coming to see.

The site is up in the wooded hills, above all the south-east-facing slopes, where Beaujolais grapes are grown. Found down the end of a long shadowy track, it is well away from what is anyway a pretty quiet road, so there’s little to breach the peace. There are the roulottes and a marvellously restored complex of farm buildings, which looks a bit like a Spanish finca, with a small, quiet pond, ideal for sitting about and pond-ering.

You have three roulottes to choose from; not quite one for every mood, particularly if you’ve got a teenager in tow, but with enough variety to make deciding which one you fancy a bit of a tester. La Roulotte des Amoureux is, as the name suggests, one for lovers, and is decked out in nostalgic 1950s style with beautifully carved wood and mirrors. La Roulotte des Ménages, the riding masters, began life plying the trade fairs of northern France and is more reminiscent of the 1920s, while the largest of the three is La Roulotte des Étoiles, which comes with sequinned cushions and a variety of decorations collected from those travels through the Orient.

All the roulottes are tastefully kitted out and have the added bonus of en suite facilities. You can even have your breakfast delivered to your front door if you feel like really kicking back and enjoying the peace and quiet. If you want to crack open a bottle of the local vin, though, it’s probably best to wait until later in the day. After all, it might have been made in a hurry, but that’s no reason for you to rush.

The facilities are en suite for each roulotte, so there’s no traipsing through the morning dew in your flip-flops to have a shower. Inside, the bedding is provided, but you need to bring your own towels. There’s a breakfast room in one of the restored buildings and a reasonably stocked kitchen, but you can build a fire if you fancy cooking en plein air, so that you can enjoy the beauty of the gardens and the views over the red-tiled roof of the farmhouse into the valley beyond.

Glampers, wannabe gypsies and dogs (on a lead) – yes. Tents, campervans and caravans – no.

You really have to travel back down the slopes and stop off at one or two of the vineyards that offer tastings. Julien Sunier's is the best of the local options and only 6km from your wagon. The site is also handily placed not far from the Burgundy sections of the voies vertes, France’s network of cycling and roller-blading routes. For something a little loftier, you can take a hot-air balloon ride and view the vineyards at a snail’s pace from on high with Montgolfière Air Escargot (00 33 3 85 87 12 30).

Breakfast is included in the price of the roulotte and is served up each morning in the farmhouse. With 48 hours’ notice you can order yourself a cold picnic to take with you for the day’s activities. It costs €30 for 2 people. Otherwise you’ll find local markets in Cluny (Saturdays), Villefranche-sur-Saône (Mondays), and Belleville (Tuesdays). If you feel the need to dine out, try the Auberge du Haut Beaujolais.  menus (€15–€25) made from local ingredients. Note that it’s open every day.

From A6, exit 30 to Belleville then D18 to Avenas. In Avenas, where D18 turns sharp left to Ouroux, continue straight along D18e towards the Col de la Serve. Eventually in La Serve, turn right at T-junction and site entrance is just down the hill on your right. There is a small signpost to guide you. The GPS co-ordinates are: 46.206478,4.568503 Although there are regular trains to Belleville, you would need to take a taxi from there, which would be roughly €40 for the return journey.

This was our favourite place that we stayed in all of our accommodation whilst traveling in France. Beautiful romantic gypsy caravan set amongst hills and vineyards providing fabulous scenery. Each caravan comes with its own huge fire pit, table and chairs, as well as sun loungers. There are Bbq’s on site that you can borrow and a communal kitchen should you wish to make your own dinner. The owner was very helpful and spoke good English. We were provided with an amazing breakfast in the morning containing croissants, bread, jams, honey, orange juice and coffee. There were no issues bringing our small dog and we weren’t charged extra. Couldn’t fault anything. Loved our stay and only wish we could have stayed longer!
Show more