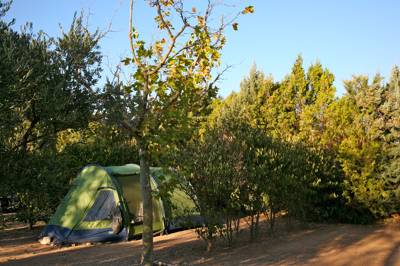 Impossibly cute and impressively neat campsite, with peerless access to pretty Eygalières and the Provence countryside

Chances are the area around Les Oliviers will have charmed the pants off you before you even arrive at the site. The drive there through the Provence countryside – think pretty villages, sun-kissed orchards and manicured vineyards – is simply stunning. The listed village of Eygalières continues the need for superlative descriptions as it tumbles down from a summit in the Alpilles hills. But this is just the warm-up act.

Even after such a memorable preamble, the campsite doesn’t disappoint. Au contraire. This family-run place goes back three generations to 1963. Its 33 pitches (for tents and caravans), all tucked in amongst almond and olive trees, strike an immediate chord that reverberates throughout your stay.

There aren’t an abundance of amenities. The basics are all included (electricity and water points, decent showers and bathrooms, a reception with information), but since the site is literally an olive toss away from the high street of Eygalières, everything you’ll need (and more) is right on your doorstep.

Eygalières has are all kinds of shops and conveniences, from a baker’s and a butcher’s, to a grocery store and a chemist – there’s even a post office should you need to finally send that postcard home that you’ve been clinging onto since Paris or Nice.

On the sightseeing front, the town offers several highlights, such as Chapelle Saint- Sixte (which dates from the 17th century), a local history museum with prehistoric relics (located inside Chapelle des Pénitents) and a small, pretty hermitage that lies just over half a mile (1 km) out of town.

You’re spoilt for choice here in terms of outdoor activities. The village is right on the long-distance walking route GR6, and cyclists can hit the D24 from Eygalières and take a tour round some of the Alpilles landscapes (hire a bike from the site if you didn’t bring yours). Don’t be surprised if you see some famous types along the way. Actor and bon vivant Jean Claude Brialy (one of France’s most respected cultural figures with over 180 films, a slew of theatre performances and numerous novels to his name) lived here until he passed away in 2007; and Alain Prost still calls Eygalières home, though you might have to have sharp eyesight to catch him whizzing past!

Further afield lie bigger treasures. Saint- Rémy-de-Provence – one of the ‘must-sees’ in Provence – lies only 6 miles (10 km) away. This historic village, built on one of the oldest archaeological sites in Europe, boasts beautifully restored old houses, lots of lovely fountains and an inordinate amount of elegant boutiques. The town is famous for many things, but mostly for its association with Vincent Van Gogh, who produced more than 150 paintings of the surrounding countryside during his time here.

Slightly further out in the Alpilles is the village of Les Baux-de-Provence, a magnificent, restored medieval village perched on a rock around fortified ruins. Perhaps due to its being labelled as ‘one of the most beautiful villages in France’ it’s incredibly popular – perhaps overly much, given around 1.5 million tourists pass through its labyrinthine interior every year. There’s no doubting the village’s exquisite charm, nor its cultural value, but it’s worth trying to get here early in the morning to avoid the masses.

An olive catapult away (just 400 metres if we’re being pedantic) is a stable with horse riding (lessons and trekking are available) and if you’re a tennis fiend, then grab your racket and balls and head for the tennis court down the road (ask at reception).

Oh, and in case you were wondering what happens to the eponymous olives – they’re harvested around November time and taken to a local mill to make olive oil for the owners and their family. If you ask nicely, they might let you have some!

It’s a small site and what it does have – hot water, electricity points, decent showers and washing-up sinks – is great.

The local market days are Friday mornings (Eygalières) and Wednesday and Saturday mornings at Saint-Rémy-de-Provence. There’s an épicerie on the high street and organic wine buffs can visit Domaine de Costebonne (0033 4 90 95 23 54) 2 miles (3 km) away at Cave du Mas Longchamp.

Eygalières is situated halfway between Saint-Rémy-de-Provence and Cavaillon. Take Exit 25 for Cavaillon from the A7 motorway on to the D99. Once in the village, follow the ‘Camping’ signposts.

Trains run to Cavaillon, 6 miles (10 km) from the site. Buses run both from Cavaillon (30 minutes away) and from Avignon (50 minutes away) a few days a week, and stop at the high street in Eygalières. From there it’s 200 metres or so to the site. 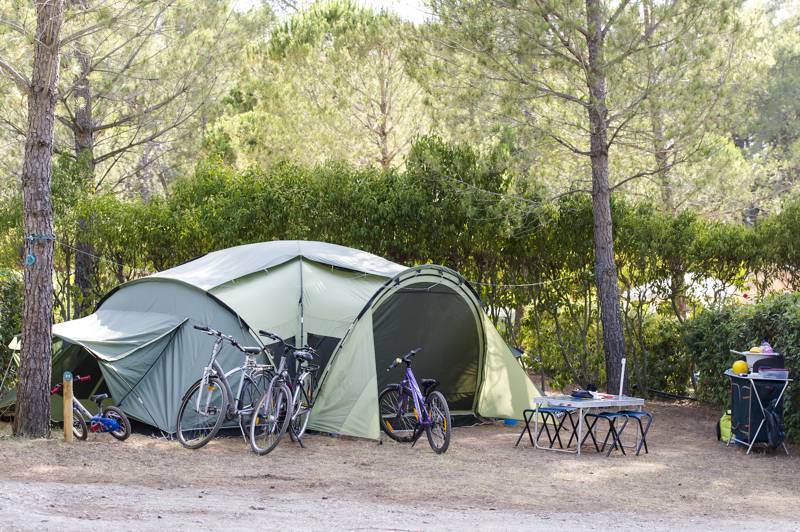