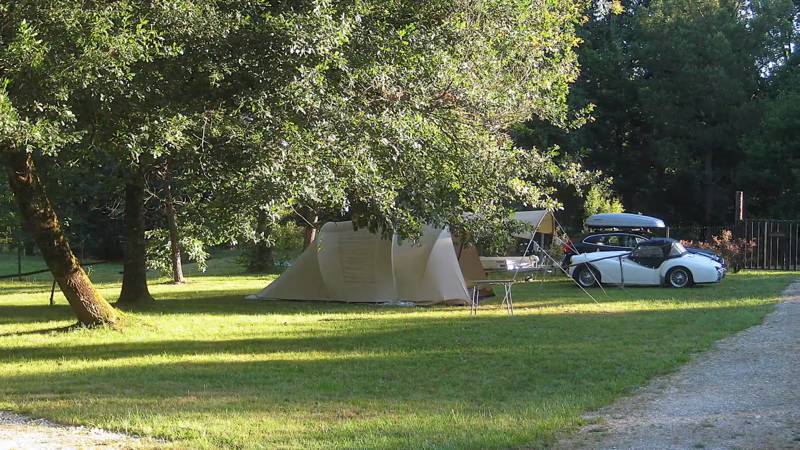 A peaceful, traditional campsite in a quintessentially French setting

There are few places more famous for their wine than the stripey corduroy countryside between Bordeaux, Périgueux and Cognac. Camping La Motte has the sort of entrance you’d expect: Road after road passing woods and tiny vineyards before pulling into the campsite itself, with a long field of vines forming the site’s eastern boundary. After checking in, you’ll find your patch amongst the trees, left for a spot with a bit more sun, right for a space near the little fishing lake.

Dappled shade, the tranquil lake and the eight-acre vineyard opposite sort of sum up what this campsite is all about. Small, peaceful and quintessentially French, it’s the antithesis of a Euro Park, with few frills but all the camping essentials. Pitches are flat, there’s plenty of shade and the lake and rural setting encourage ample wildlife, including roe deer and ospreys. In the height of summer there is a snack van, positioned so that parents are overlooking the little playground, but there’s no organised entertainment or activities (other than the odd game of boules).

A lack of organised entertainment doesn’t mean a lack of organisation, however. The washblock here is kept spotless and Anja and Ruud are amongst the friendliest campsite owners we’ve met. In fact, they’re so organised that guests will find a wealth of mapped out walking routes and cycle loops available, provided in multiple languages and varying in distance. It’s five kilometres walk/ride to the nearest sizable settlement, Montguyon, with the ruins of a Medieval castle built on a rocky outcrop above the town square, while other routes take in sandy farm paths or along footpaths in amongst the vineyards.

Further afield, it’s 40 kilometres to the Dordogne but the Dronne is a far more popular local river for canoe paddling and it takes just 20 minutes to drive to pretty Parcoul where you can rent your vessel. The coast, Bordeaux, Royan and Rochefort are all within daytripping distance, too, though it does mean finding yourself back amongst the relative crowds of this part of France. After a few days in the peaceful surroundings of the campsite, you might prefer to simply stay put, enjoy the quiet and read a good book. Perhaps with a glass of wine. After all, when in Rome...

Book with complete confidence at Camping La Motte with the Cool Camping Coronavirus Booking Guarantee. We guarantee the following clear policy for your booking:

There's one washblock with three toilets (plus three urinals in the gents), three showers, three washbasins and a separate disabled-access bathroom. Covered washing-up area with three large sinks. There's no washing machine but there is a laundrette in nearby Montguyon open seven days a week. There's a small children's playground next to the terrace and a gravel area for playing boules.

There are several popular walking and cycling routes directly from the campsite and Anja and Ruud are more than happy to give you advice and directions – they know the area like the back of their hands. Each route has also been detailed on their website and there are also a few maps on the site you can look at. To take in the local vineyards, walk the southern route that starts through a forest path that leads, after a kilometre or so, right through the heart of the local vines towards the hamlet of Favorit (you can also extend the walk via Le Gât). Pick of the cycle routes is perhaps the 20-mile Montguyon to La Voie Verte route, which takes in a nice flat cycle path (a former railway line) for about a quarter of the route, plus a good stopping point in Montguyon and at Lac Beau Vallon for a swim (the lake has a sandy beach, an open-air restaurant and cute little playhouses for children). There are plenty of other route options though, so take your pick!

Canoeing is popular on the River Dronne. Parcoul is 12 miles from the campsite – rent canoes from Parcoul Canoe (+33 5 53 90 79 73) – or start further upstream at Aubeterre-sur-Dronne (19 miles from the campsite), where there's a very impressive underground church (+33 5 45 98 65 06). There are also several horse riding schools offering tours within 10 miles of the campsite. Écurie Narolles (+33 6 86 70 10 90), half a mile away, allow you to walk alongside children as a 'guide' whilst they ride smaller ponies. Further afield, meanwhile, recommended day trips during longer stays at the campsite include Bordeaux, Saint Emilion, Rochefort and La Rochelle.

In the height of summer a snack van appears on the site (operated by a third party) but there are also plenty of great French restaurants nearby. Le Bistrot du Circuit (eight kilometres away; +33 5 46 04 16 96) is located along one of the campsite's recommended cycling routes, as is Aire de loisirs de Beauvallon (+33 5 46 04 22 99). The nearest spot, though, is the little pop-up pizza kiosk Le Kiosque à Pizza (+33 5 46 70 45 64) four kilometres away in Montguyon. Camping La Motte is in a region famous for its wines, from the local Pineau des Charentes to the famous Cognac. Jean Moucheboeuf near the Dolmen offers wine tasting by appointment (+33 5 46 04 19 72) and there's also wine tasting at La Maison du Vin in Blaye, opposite the famous citadel. There's always a market going on somewhere, whatever the day of the week: Try Chalais (19 kilometres) on Mondays (combine it with a visit to the underground church in Aubeterre-sur-Dronne), Jonzac (40 kilometres) on Tuesdays, Coutras (22 kilometres) on Wednesdays, Montendre (22 kilometres) on Thursdays, Ribérac (42 kilometres) on Fridays, Coutras and Jonzac are both on again on Saturdays and Montendre and Jonzac on Sundays.

All year, except for a short break during the festive period (mid December–mid January).

For true lovers of nature, space and tranquility Camping La Motte is situated close to the village of Montguyon in the extreme south of the Charente-Maritime where the departments of Charente, Gironde and Dordogne meet.

We have chosen to limit the new classification to one star, but if you want more you only have to look up at night! At La Motte the emphasis is on relaxation, not so much on entertainment.

There are only 45 pitches on roughly eight-and-a-half acres, all with electrical hook-up (10 or 16 amp). Of course you have choice between sunny and shady pitches.

Along one side of the lake and along our neighbour's vineyard you can find some chalets.

At some distance from the crowded beaches on the Atlantic coast we offer you an oasis of tranquility from early spring until late fall. In an idyllic setting you can fully enjoy nature and really relax.

However, the campsite is also the ideal starting point for daytrips to some famous places in the area or even a day at the beach.

45 camping pitches, all with the option of electrical hook ups (10amps or 16amps), plus 15 static mobile homes. 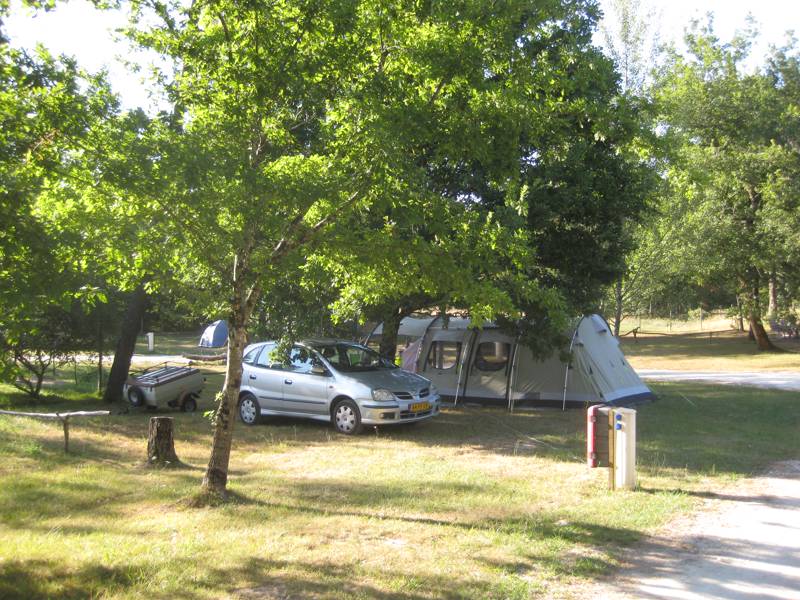 i
Spacious grassy pitch with electrical hook up 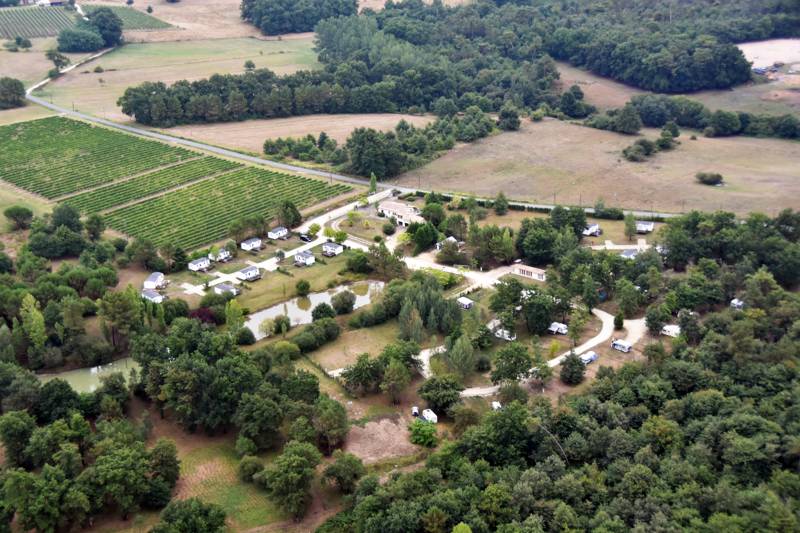 i
Modern chalet, ideal for families or groups up to 4 people

The campsite is in a rural spot and public transport in this region is relatively infrequent. The nearest bus station is in Montguyon (3 miles away) and the nearest train stations are in Saint-Aigulin (10 miles away) or Montendre (15 miles away).

See Campsites in the Dordogne Valley

See Glamping in the Dordogne Valley