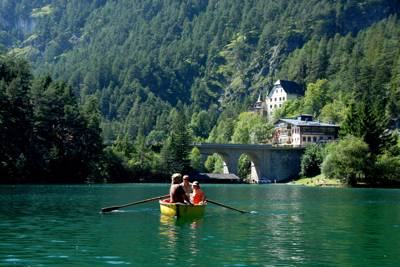 A castle, Tyrolean Alpine sceneryand some of Europe’s clearest lakes
Austria isn’t exactly short of castles. From Vorarlberg to Vienna the region is swamped with Baroque citadels and Renaissance fortresses. Whilst Schloss Fernsteinsee might not be in the same league as Festung Hohensalzburg, Liechtenstein Castle or other such flamboyant Austrian venues, there’s no denying it’s a handsome slice of history.

It certainly says much about the place that the Bavarian King Ludwig II – no slouch himself in the castle-building business – was very fond of staying here. He came not only for the winsomeness of the castle but – as with most visitors both then and now – for its enchanting, crystal-clear lakes and the high sculpted peaks of the nearby Tyrolean mountains. Were Ludwig alive and visiting the place now, he would doubtless be highly amused to find that the castle grounds had grown a campsite. In the 19th century, combining castles with campsites wasn’t the catchiest of concepts, even though nowadays the two things can go together like schnitzel and schnapps.

Set over 500 metres or so from the castle (transformed into a luxury 4-star hotel), Fernsteinsee’s site is relatively new. It has 125 generously sized pitches arranged around a circular, tree-lined road. The remote end of the road has grassy pitches and a contemplative ambience; the nearer side has a sunbathing lawn and a more sociable vibe.

The site, as you might expect it being connected to a hotel, has above-average facilities. There’s a heated loo block, washing machines and a well-stocked shop, as well as a bar, an outdoor terrace, a sauna and a solarium (though these cost extra). To get to the hotel and the lakes, just follow the silvery stream through the adjacent woods for 10 minutes.

Use of the hotel is pretty much restricted to the restaurant, though campers qualify for a small discount at breakfast and get a free dessert at dinner – a four-course, 4-star gourmet experience that’s highly recommended when you find the outdoor life has perked up your appetite. Use of the lakes, which are unbelievably clear, with a visibility range of over 50 metres, is also somewhat restricted. The fragile nature of their ecosystem means that only diving pros with a minimum of 50 logged dives can explore the depths, though everyone is free to swim, take a boat ride, or lounge in the sun on the grassy banks. The surrounding area is certainly worth a peek – or perhaps a peak – or two. The site is ringed by the Tyrolean Alps, which can be explored from small, charming villages such as Nassereith (3 miles/5 km) and Obsteig (8½ miles/14 km), or from the town of Imst (9 miles/15 km), an attractive, mountain-surrounded spot brimming with activity opportunities such as climbing and canyoning.

Since Fernsteinsee lies close to the German border, it’s also a cinch to explore pretty market towns like Garmisch-Patenkirchen (18½ miles/30 km), from where you can traverse Germany’s largest mountain, the mighty Zugspitze. The hike from Garmisch- Patenkirchen takes between one and two days (lodges and food are available on some routes), though you can find shorter routes from the closer Austrian town of Ehrwald (10½ miles/17 km). The views from the summit are nothing short of spectacular.

Head east 30 miles (50 km) along the A12 and you’ll arrive at Innsbruck, Tyrol’s capital and a haven for skiers and mountain-hikers. Here you have museums and cafés, markets and boutiques – a colourful and vibrant dash of modern Europe in the midst of Austria’s eternal landscape. With the lakes and your castle-campsite complex eagerly awaiting you upon your return, it’s difficult not to feel you’re living like a king.

Facilities are excellent. There is a dedicated reception/shop and shower block, a playground for the kids, lakes to swim in and a sauna/solarium, too (€6). An outdoor playground supplies free entertainment, and there are pedalos and rowing boats on the lakes.

The shop sells eggs, bread, soups and sweets, as well as pizza in the evenings and fresh bread in the mornings.The adjacent castle has 2 restaurants, where campers get small discounts and special offers. There are daily markets in Obsteig and Imst (closed Sundays), both 9 miles (15 km) away.

From Zurich, drive towards St Gallen, then Feldkirch. Pass over the border into Lichenstein and Austria. Head towards Innsbruck through the Arlberg tunnel to Imst. Turn onto the B171 towards Imst and follow signs for Fernpass. After a bridge you’ll see the huge Hotel Schloss Fernsteinsee sign. From Munich take the A95, then the B2. Exit on the B23 towards Grainau/ Garmisch, entering Austria. Continue onto B187/ Ehrwalder-Bundesstrasse, take the ramp to B179/ Fernpass-Bundesstrasse until you see the Hotel Schloss Fernsteinsee sign. Catch a train to Imst, and from there an hourly bus comes to Schloss Fernsteinsee (sometimes changing at Nassereith).