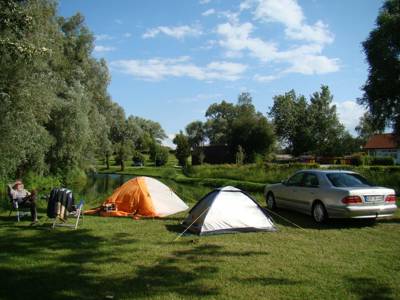 Camping on the banks of the mighty River Danube, the Queen of Europe's rivers
The mighty Danube is Europe’s second longest river and dominates a vast amount of the continent’s geography. Churning its way through no fewer than 10 different countries it is arguably at its most beautiful here in Austria, where pine-clad slopes climb dramatically along its banks. It’s no surprise, then, that Camping Au an der Donau, overlooking a wide stretch of the grey swirling waters, is just as well furnished with cyclists as it is with campervans. The riverside trails bring a stream of long-distance peddlers in skimpy expedition tents but the local history and excellent walking routes mean there’s something for every taste.

Situated on the flatter riverside plains that occasionally straddle the Danube before it swings back in to the hills, Camping Au an der Donau is a wonderfully unassuming place. Spread around a central, naturally formed lake the pitches are only designated in the main electrified area, while elsewhere the grassy field is open for tent-goers to use. The majority of these spots, while enjoying the rich greenery of the campsite and the lake's quaint wooden rowing boat, don’t actually have views of the Danube. A protective bank, on which the bike trail runs, shelters much of the campsite from its waters. Near the reception kiosk in its pwn private garden, a singly wooden glamping tunnel provides perfect seclusion for any glamping couple, with idyllic views of the little marina and the Danube itself.

With two well-kept sanitary buildings, a campfire and barbeque area, free Wi-Fi and keenly priced bike hire the campsite is up to date with modern standards. A guest garden, striped with picnic benches, is open to campers and locals alike and when the sun’s out there’s a social buzz to the place that’s only accentuated by the buoyant enthusiasm of the campsite owner, Gerhard, ever smiling and on hand.

Active types have options beyond cycling, with a volleyball court down by the riverside and a ping-pong table to use. At one end of the lake you can also cross a small wooden bridge to the neighbouring recreation centre – a separate business in the village that welcomes campers to use their tennis courts. It’s much in keeping with the general vibe of the place. Au an der Donau seems almost like an extension of the campsite itself and a pleasant one at that, with cute little restaurants serving fish straight from the water. Campers aren’t anything new here but everyone’s still keen to give a big, warm welcome. Perhaps they put something in the water? Who knows? It would certainly explain the richness of the flora and fauna of the campsite, but that’s beside the point. A friendly campsite is a winning campsite and this one gets our vote.

8 showers, 18 toilets, 60 electrical hook ups, 2 washing machines and 2 dryers. There is a table tennis table for anyone to use up by the reception building where local information is found. Bikes and electrical bikes are available to rent onsite (and highly recommended – take the riverside route) and there is a row boat to use on the campsite pond. A hammock and a hanging chair free of use at the tent area – perfect after a long ride on the saddle. Sleeping barrels feature two beds, benches and large windows at the gable end of the barrel. Wooden tents comfortably sleep up to 4 adults with beds and storage inside, but your own sleeping bags are required.

On the doorstep the Eurovelo 6 cycle route covers not only the entire length of the Danube but also joins others waterways to eventually reach the French coast. The Danube trail R1 is another popular cycle trail and if you follow these routes west you meet the dramatic schlogen loop, an exquisite meander where you pay a couple of euros to take bikes across the river on a tiny wooden motorboat. The steep forested banks that climb up around the valley provide excellent walking, as does the entire landscape north of the campsite. Other activities in the immediate vicinity include beach volleyball, tennis, fishing and canoeing but for slower paced attractions try Abbey St. Florian (0043 7224 89020) or the historic town of Linz. Far more somber but worthy of a mention is a visit to the Mauthausen Memorial (0043 7238 22690). This former site of a Nazi concentration camp provides insights into the devastation once here – undeniably interesting even if not something that's on everyone's must-see list.

Basic finger food and drinks are available onsite alongside local specials like smoked trout. Within a few hundred yards, in the village of Au an der Donau there are 3 restaurants and a charmingly traditional, wooden-clad, Austrian pub.

Its 5km to the nearest train station and 200m to the local bus station. You can also travel by boat, with a ferry pier 300m away.

I visited this site while cycling the river Danube. Really beautiful part of the river. Very well set up for cyclists. The campsite is lovely – much as described in the review written – and though I didn't stay in the pods they looked really cool. Couldn't guarantee good weather, I was there in late Sept and it rained loads, but spaces on the site to shelter. V friendly staff. Would visit again if in the area!